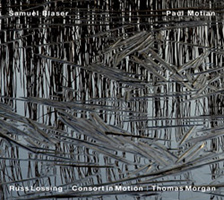 Initially defined by composer Gunther Schuller in the late 1950s as a synthesis of jazz improvisation and classical composition, the Third Stream movement has since drifted into relative obscurity. However, in the ensuing decades the milieu has provided fertile ground for a number of visionary artists to make bold statements. The increasingly commonplace role of conservatory educations for enterprising jazz musicians has also brought newfound potential to this aesthetic; the number of young artists versed in classical composition and jazz improvisation is greater now than ever before.

Conservatory-trained Swiss trombonist Samuel Blaser came of age listening to classical music, with a fondness for the Baroque period. Numerous articles have been written about the technical similarities between Baroque music and bebop, so the merger of the two is no great surprise—that Blaser so seamlessly juxtaposes Renaissance-era melodies, harmonies and rhythms with advanced post-bop progressions and modulating time signatures is. Drawing upon the work of Claudio Montiverdi and a handful of his 17th Century Italian contemporaries, Blaser rearranges these pieces in novel ways, illuminating sonic parallels between compositions written centuries ago and the music of today.

For Consort in Motion, his fifth album as a leader/co-leader, Blaser is joined by an intriguing mix of personalities, including pianist Russ Lossing, bassist Thomas Morgan and legendary drummer Paul Motian. Blaser hand-picked Motian for the session, Morgan is a longstanding associate of the trombonist, and Lossing is the line-up's wildcard; his frenetic abstractions contrast vividly with the young leader's contemplative ruminations, making an ideal foil while elevating the date beyond mere formalism.

Fearlessly modern, yet respectfully regal, Blaser's adventurous arrangements and reinterpretations offer the best of both worlds, enriching the raw impetuousness of avant-garde jazz with the proven sophistication of ageless classical forms. Consort in Motion is a high-water mark in the enduring lineage of the Third Stream, and all the more inspiring for the focus of its vision.