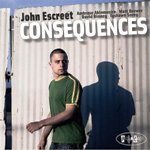 A commanding performer who comps and solos with the percussive flamboyance of Jason Moran (who wrote the recording's liner notes), Escreet's imaginative pen brings forth omnivorous music: Andrew Hill's avant- gardism, flawless bop, the eccentricities of free jazz and contemporary composition. The three-part and thirty minute "Consequence Suite" contrasts multiple moments of drama, intensity and calm. These counterpoints can be heard during Escreet and Sorey's chaotic dance in "Movement I," Brewers' stirring bowed solo in "Movement II," or the cacophonous torrent of instruments in "Movement III" which morphs into Akinmusire and Binney's marching horn dialog and then into a power coda.

What lies outside of the suite is also intriguing. The angular beginnings of "Wayne's World" flow into a hip melody contrasted by two distinct paths: the first contains a powerful exploratory solo by Binney; the second trajectory, a slow pattern where Akinmusire delivers some introspective playing. As in the other compositions, the group interaction and each player's vivid abilities are outstanding.

Escreet provides nimble Fender Rhodes action on the classy "Dilemma" along with with some nice horn arranging, whereas surrealist explorations in "Somewhere between Dreaming and Sleeping" are colored by electronic atmospheric touches. The recording closes with the brilliant take on Andrew Hill's "No Doubt" from the master pianist's 1964 Blue Note recording Andrew!!!. Esctreet's version continues its unique qualities of dissonance, mystery and poignancy.

Cerebral, gutsy, and filled with personality, Consequences is a discriminating work from a promising talent and one of the brightest releases of 2008.