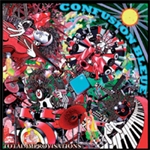 Pianist Nobu Stowe continues developing and honing his quest of "total improvisation" with the marvelous Confusion Bleue. The music hovers within the world of free jazz but almost always contains elements that imply structure, allowing the compositions to feel more or less anchored as time flows by.

Stowe's explorations are supported by many of the same musicians from his previous efforts, Hommage an Klaus Kinski (Soul Note, 2007) and the Brooklyn and New York Moments (Konnex, 2006). Sonic engineer Lee Pembleton's effects vary in audibility, but it feels as though he is always there, providing both specific manipulations and background sensory filler. Ross Bonadonna, Stowe's main protagonist, is particularly blazing on guitar, but also plays alto saxophone while providing intensity and extremely close counterpoint at every moment. Drummer Ray Sage only rarely sets up a regular pulse, but otherwise uses his drums and cymbals as another voice in the conversation. Rounding out the players is 5-string double bassist Tyler Goodwin, whose arco playing can be positively unearthly as he weaves around Bonadonna's guitar.

Besides grand piano, Stowe plays electric piano, glockenspiel and bells, sometimes within the same track, each of which changes the sonic palette. The movements and interludes are unpredictable in overall sound and emotional temperature. What is clearly audible, however, is how closely each member of the group is listening to everyone else and to the overall sound being produced.

The goal of "total improvisation" is strikingly reached not simply because frenetic, dense free sections dissolve at times into melodic lines or rhythmic or harmonic regularity, but rather that these extremes ultimately emerge as the end points of a range of expression. As Confusion Bleue progresses, the music creates its own world, eventually sounding completely natural and inevitable from moment to moment.

This natural suppleness is epitomized by the inclusion of "Blue in Green," Bill Evans' beautiful tune from Miles Davis' Kind of Blue (Columbia, 1959). The track is beautifully atmospheric and emerges as but one pole of many within this startlingly engrossing album.