By EYAL HAREUVENI
August 27, 2011
Sign in to view read count 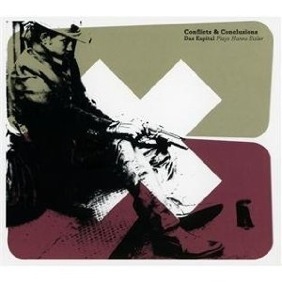 Eisler's compositions rarely were covered by free jazz musicians. The pioneer European trio of Peter Brötzmann, Fred Van Hove amd Han Bennink covered a few Esler compositions on the hard-to-find Einheitsfrontlied (FMP, 1973), though the composer's multi-layered writing attempted to fill the gap between elite art (being one of composer Arnold Schönberg's favorite students) and popular culture, as a composer who wrote to one of the finest songwriters of the last century, Bertold Brecht. Still, Esler's music remained very characteristic and well-informed by new musical innovations of the twentieth century.

Obviously, Das Kapital is aware of Esler's troubled history. He fled Nazi Germany in the mid-1930s, to settle in New York. From there, he was evicted with just two days' notice by the McCarthyists in the late '40s, resettling in his native Berlin, where very soon he got into trouble with the governing Stalinists. On Conflicts & Conclusions ,Das Kapital presents lesser-known songs from Esler's engaged political period in the 1930s and more innocent songs from his Hollywood soundtrack days, as well as propaganda songs that he scored after returning to Germany.

On a string of songs composed by Brecht and Eisler, Das Kapital finds inspiring solutions to retain their still-relevant message. On "Kohlen fur Mike (Coal for Mike)," the trio stretches the melodic possibilities, using them as a vehicle for a free improvisation. The march-like, anthemic character of "Friedenslied (Peace song) (after Pablo Neruda)" is retained, but tons of free, high-spirited energy are injected into the original theme, actually managing to reclaim its original anti-totalitarian call. And on "Sklave wer wird dich befreien (All or nothing)," Das Kapital turns the revolutionary call for workers solidarity into a sophisticated Latin-tinged dance.

Conflicts & Conclusions is an inspiring set of idealist music from three fearless musicians who are not shy to suggest that the role of artists is as subversive agents against any powerful ideology, regime or convention.