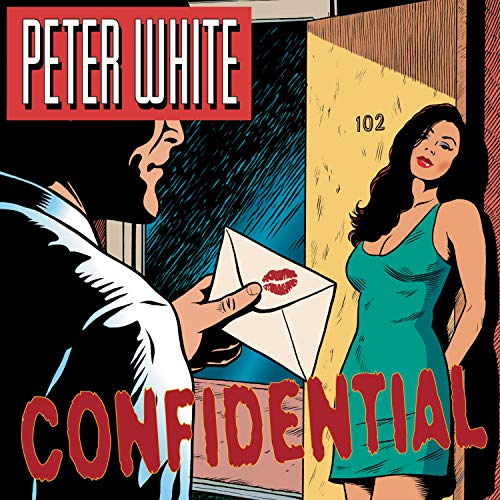 Smooth jazz guitar icon Peter White, whose pretty acoustic picking has defined the genre for more than a decade, offers eleven sometimes intimate, sometimes jubilant, always engaging slices of his heart on Confidential. You’d expect nothing less from a man who inspires a devout fan club and is eagerly welcomed onto stage and into studios by fellow musicians. Settling in with a new Peter White disc is like inviting Mr. Rogers and his Grandpa sweater and soft slippers into your living room.

In addition to Botti and Brown, other guests include Brian Culbertson, Mindi Abair, Steve Ferrone, Rex Rideout, Michael Paulo and a great percussion team. Culbertson provides some needed and jazzy piano interludes, especially on the title track, which he produced, while Abair adds sax to “Are You Mine,” a top-down driving song propelled by strings. Guests add flavor, but White of course is the brightest star here, even bringing out his accordion for “Swept Away,” which evokes images of Italy, flamenco players and flamenco dancers. “How Does It Feel” is the most unique song on the disc due to White’s playing the killer hook over a rich percussive beat. Matthew Hager, who produced the song, plays what the liner notes call “weird guitar,” keeping time with White’s acoustic. It’s a great touch.

Coast Road Drive; Talkin' Bout Love; How Does It Feel; She's In Love; Are You Mine; Lost Without Your Love; Confidential; Swept Away; Jump On It; Stormfront; Endless Journey