By DOUG COLLETTE
November 25, 2018
Sign in to view read count 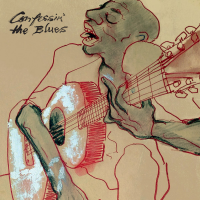 If it weren't so scrupulously annotated (at least up to a point) or attractively designed, this title might be flippantly described as "The Greatest Hits of the Blues." As is, it is the third in a roots revival series of sorts. Confessin' The Blues follows Chicago Plays the Stones (Raisin' Music, 2018), where a Windy city musical aggregation covers the curators of this set and, last but not least (and actually first in chronological order), Blue & Lonesome (Rolling Stones, 2016) by Mick Jagger, Keith Richards, Charlie Watts and Ronnie Wood themselves. The fame of the names and many of these songs on this compendium, even to casual listeners, illustrates its function as both primer and sampler and also reminds how the idiom became an elemental force of nature.

Now there's similar collections aplenty in the marketplace, devoted to the genre at large and many if not all the individual artists as well. But this two-CD set, adorned with artwork by Wood himself (within the blood red color scheme) is a physically impressive package on its own terms: the triple-fold digi-pak contains the song credits as well as including a booklet with historical info and eyecatching in situ photos on the subjects within as well as a summary essay by Colin Larkin. All of which is over and above the fact that the respective labels involved, BMG and Universal, have pledged to donate 10% of the proceeds to the Willie Dixon Blues Heaven Foundation. As a result, purchase of the title, whether compact disc, vinyl LP or in the limited edition book, pays at least some reparations to artists unjustly overlooked and/or ignored for much of their respective careers (though the absence of any female artists here compels a sequel).

Kudos go to Rolling Stones 99 for overseeing the project in another gesture of homage—and a pragmatic one—to music and musicians that deeply inspired them early in their career. And it's easy to see why such figures as Muddy Waters, Chuck Berry and Howlin' Wolf so deeply ignited an almost missionary zeal the young group: songs such as "Rollin' Stone," "Carol" and "Little Red Rooster" are the essence of structural simplicity, the earthy tones of which are alternately bitter and sweet, laced with a hard-earned humor that assuages despair at (almost) every turn. There's no technical detail on remastering or any other audio enhancements to recordings dating back decades, nor are there musicians credits (which may not be fully on record from the original sessions anyway, though Berry's pianist Jimmie Johnson is just one who ought to receive the recognition he's due), but that doesn't mean the sound doesn't resonate or that the performers don't command full attention in and of themselves.

Many contemporary rock musiclovers may or may not be surprised how familiar are many these songs. They've been covered by The Allman Brothers Band (Big Bill Broonzy's "Key to the Highway"), Stevie Ray Vaughan (Elmore James' "Blues Before Sunrise") and Creedence Clearwater Revival (Dale Hawkins' "Suzie Q"). Nevertheless, hearing these originals will do doubt be revelatory: alternately dangerous and seductive, this procession of short, sharp tracks exhibits combos small and large, featuring acoustic and electric guitars, horns and piano sequenced in such a way to maximize that very variety of sound over its two hours plus total playing time: whoever formulated the listing deserves kudos aplenty.

Hear Bo Diddley's "You Can't Judge A Book by Its Cover" and it's immediately apparent his wizened observation comes from experience as true-to-life as the iconic Robert Johnson's tortured "Love in Vain Blues" or master harpist Little Walter's "Just Your Fool." Meanwhile, regret can't douse a desire that's as readily and overtly stated as it is on B.B. King's "Rock Me Baby;" that latter guitarist's singing is as full-throated as his instrumental tone is sleek, redolent of multiple emotions and versatile musicianship that overflows within Confessin' the Blues.

A novice musiclover might well utilize this package to ascertain direction to more deeply pursue a growing passion (and build an estimable collection, for instance, delving into the lengthy discographies of John Lee Hooker and the still-alive-and-well Buddy Guy), but even positioned as an end in itself, these forty-two tracks stand as a kaleidoscopic vision of music that takes as many different forms as the vivid personalities involved and has, in turn, proved as enduring as its many creators.