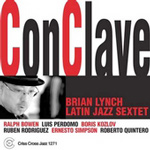 The spirit of the clave flows freely through the blood of Brian Lynch. For many years the veteran trumpeter has formed an extensive body of work flourishing in both straight-ahead and Latin jazz styles via associations with Phil Woods, Horace Silver, the Buena Vista Social Club, Eddie Palmieri, and many others. He also has worked with younger artists like drummer Dafnis Prieto, pianist Luis Perdomo, and saxophonist Miguel Zenon, who are also writing new chapters in pan Afro-Latin music.

ConClave is Lynch's latest document of music, continuing in the vein of 2004's Que Viva Coltrane, a collaborative effort with trombonist Conrad Herwig. With the inventive horn arrangments and the rhythmic pulse of drums and percussion, this mix of new music is vibrant, danceable, and satisfying, due in much part to Lynch's leadership and a very hot band.

The music is set ablaze from the start on "Tom Harrell with a bright sax/trumpet combo girded against a bopping tempo. But even when the tempo slows on the lovely "La Sietiera, the heat is still felt. This passion is maintained collectively and individually by the contributions of each musician. On "La Mulata Rumbera, which clocks in at thirteen minutes, all instruments move as one yet each expresses its own voice with detailed solos winding through labyrinth patterns. Lynch is to be commended for producing a recording which exemplifies good jazz, whether it's Latin or any other style.

Visit Brian Lynch on the web.