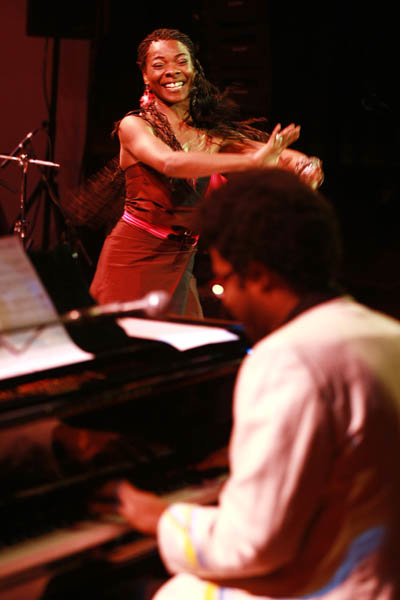 From the opening notes of Oro santo-Mamita to the final dramatic pauses in the familiar Ojos verdes:

Concha Buika gave a bravura performance at a sold out Palau de la Música on Thursday night, November 5th as part of the 41st Voll-Damm Festival International de Jazz de Barcelona. With a Gypsy flair and a hint of the blues, few singers, male or female, old or young have the range—from an anguished whisper to a mighty cry—that Buika displayed in a show that focused largely on her new album with Cuban pianist Chucho Valdes, El último trago (Warner Music), which honors the rancheras once sung by the great Mexican singer Chavela Vargas. Vargas art, groundbreaking in the fact that she put a distinctly feminine spin on rancheras, and which until then had solely been the province of male singers, provide the perfect vehicle for Buika's impassioned singing who has added a Roma flair and made them as much a defiant exclamation as a heartbroken cry. In a vocal timbre that's often likened to American jazz/pop songstress Nina Simone, Buika, who has also spent time performing the songs of Tina Turner, is awesomely fearless, ferociously infusing her voice with sass and rebellion, driving it at times into a resounding roar, as she intimately dissected the lost love of the rancheras.

Ably accompanied by guitarist and producer Javier Limón, as well as pianist Iván Melón Lewis, bassist Dany Noel and percussionist Fernando Favier, the Majorcan torch singer, cut a striking figure in a long black and magenta dress with her wide and warm smile, as she wove Majorcan, African and gypsy elements into a unique whole, even stopping near the end to add several flamenco dance flourishes.

In interviews Buika has called Vargas' music, a "journey into pain" and that singing her music should "hurt" otherwise the singer is not being sincere, and at the amazing Palau she demonstrated this again and again, especially in a trio of duets with pianist Lewis, which covered Las simples cosas, Las ciudades and El último trago. A singer of rare power and expressiveness, Buika is the kind of world class who you get the feeling could sing anything she wanted with grace and meaning, and in process making it distinctly her own.