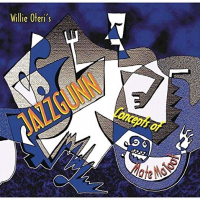 Hot and cool jam-band excellence from Austin, Texas. Over the past decade, the stigma has faded from Miles Davis’ electric experiments, and many valuable elements in the music have been recognized as it finally moved into its time. Willie Oteri and Jazz Gunn offer an enticing update of the electric Miles aesthetic, including power-pumped covers of two Davis fusion staples (“Spanish Key” and Joe Zawinul’s “Pharaoh’s Dance”). The liner notes don’t shed any light on just what “MateMaToot” represents, but in listening to this disc, one can surmise that it involves the earnest strip-mining of the early promise of jazz-rock fusion.

Bassist Chris Maresh will be familiar to fans of Eric Johnson’s music, while the other musicians here are best known to patrons of the Austin area jam scene. Maresh has one luxury that Davis bassist Michael Henderson rarely had: the freedom to move about the music as an equal partner instead of holding down ominous ostinatos. That elbow room, combined with the vision and facility of the other performers, injects an accessibility into this music that Miles’ own explorations often lacked. The unrelenting suspense of “Pharaoh’s Dance” is still present, however, as much as the darkness in “Spanish Key”.

Not that Jazz Gunn is entirely about revisiting the Davis legacy, not at all. “Song of the Sea Witch” is a pretty, rock-inflected ballad feature for saxophonist Michael Malone. The initial attitude of “MateMaToot” is urgent, funky and tense, but it opens up into major-key lightness before the thud and spikiness return. The disc closes with a 15-minute funk jam that shows these players at the peak of their creativity. Bandleader Oteri is a formidable frontman who’s more than willing to give some to the drummer, bassist and everyone else when he isn’t burning up his axe. Jazz Gunn is a sparkling jam band with an eye to the past but a most promising future.