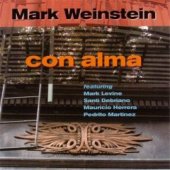 Mark Weinstein's Con Alma is a delightful collection of Latin styled tunes featuring the light and refreshing sound of jazz flute. From bassist Santi Debriano''s opening "Santi's Africaleidescope" through to the closing standard "Stella by Starlight," the combo creates a constantly catchy Latin groove, establishing a foundation for the light flittering sounds of Weinstein's flute. Although Weinstein and his sidemen contribute three of the eleven tunes, the remaining eight are arrangements of standards by well-known members of the jazz pantheon.

Dizzy Gillespie's title track well demonstrates the fusion of Afro-Cuban music and jazz for which the legendary trumpeter was known. The 32-bar form of the tune consists of a simple, almost single note head contrasted with a swinging bridge that returns again to the Latin groove. Mark Levine's piano solo flows in a straightforward and uncomplicated manner, while Weinstein demonstrates he has no lack of chops with his deft technique.

Cuban flautist Maraca's "Monte Adentro" is of interest, not only for the rarely heard bass and alto flutes Weinstein employs, but because, through overdubbing, Weinstein is effectively featured in duet with himself. The technical wizardry does not overshadow another delightful solo by Levine and a demonstration of Weinstein's range of artistry. Drummer Mauricio Herrera also is featured on an extended solo over the groove of the piano montuno that leads back to Weinstein's "duet" head.

Con Alma is a delight—the recording is high quality, the performances first rate on a nice collection of Latin-inspired jazz.