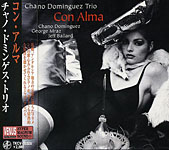 This is a rather different Chano from the one who first enthralled me with Hecho a Mano (Hand-made), his blazing flamenco/jazz mix recorded in Madrid in 1996 and released on Sunnyside a few years ago. On Con Alma he's replaced the handclaps and multilayered percussion with a traditional jazz trio, bringing on world-class band mates George Mraz and Jeff Ballard. But his roots are still very much in evidence from the first track, a dynamic take on a traditional song—my dictionary tells me "La Tatara" means "sound of a trumpet as a signal for action." There's no trumpet here, but there's plenty of action.

Dominguez has a lithe, sensitive touch, impeccable time, and terrific sense of spacing; while he has chops to burn, he lets a lot of fresh air into his playing, unlike some of his more bombastic compatriots. "How About You" is bright and playful and his "Dolphin Dance" is a whirl through the clouds rather than a splash in the sea. Dominguez knows how to build excitement, as demonstrated in the title track; "Con Alma," which features one of several fine solos by Mraz, who is justifiably famous for his lyricism and fat, round sound. Meanwhile, Ballard supplies just the right feel throughout: subtle, intricate, and ever-swinging, he gets to break out on a delightful, sparkling "Speak Low." It's a terrific trio and beautifully in synch.

One of my favorite tracks is "It Could Happen to You," which begins with a solo full of flamenco flair, then takes off for an extended joyride. This is followed by an intriguing meditation on Steve Swallow's "Hullo Bolinas" which is both free and structured, highlighting the group's versatility. The inclusion of strong Spanish compositions makes a nice mix with the familiar standards; Con Alma ia a rich and tasty feast, laced with salsa. Recommended.

La Tarara; No Me Platiques Mas; How About You?; Dolphin Dance; Con Alma; El Toro y La Luna; It Could Happen to You; Hullo Bolinas; Jure; Speak Low; Darn that Dream.