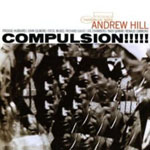 The news of Andrew Hill's passing Apr. 20, 2007 at age 75 has shaken the jazz world to the core, bringing many to pause and reflect, then head straight for the pianist's extensive now-available discography. Blue Note Records documented his every step from 1963-70 with over a dozen recordings and, with his most recent return to the label—the critically acclaimed Time Lines (2006)—his status as a giant of this music is without question.

Most of those Blue Note titles were not released until decades after the fact, however, so Hill only recently reaped the benefits of this overdue appreciation. The 1965 Compulsion!!!!! session appeared on CD for the first time just over a decade ago in the mid-1990s as part of the seven-CD set The Complete Blue Note Andrew Hill Sessions: 1963-66 from the mail order-only specialty Mosaic label. Otherwise this has remained one of Hill's very few not available in single CD form. Aside from a minor quibble—the first two of four tracks unfortunately fade out—it is one of the most unique entries into Hill's catalogue.

Any opportunity to hear longtime Sun Ra tenor saxophonist John Gilmore outside the Arkestra context is a special occasion and doubly so here on ample bass clarinet. The other horn man, Freddie Hubbard, is at his most experimental and the use of African percussion (Nadi Qamar and Renaud Simmons) in continuous dialogue with bassist Cecil McBee (and, on one track, longtime Hill associate Richard Davis) and drummer Joe Chambers turns out to be a rare experiment on record by Hill.

Listeners thus get to appreciate the percussiveness of Hill's approach, arguably more so than on any other document, filling perhaps the last imaginable void in his available work on CD and just in the nick of time. Hill played just over a week after this reissue's release, a standing room-only afternoon concert at downtown New York City's Trinity Church on Mar. 29, 2007. There could not have been a more appropriate surrounding for what would end up being Hill's final performance.