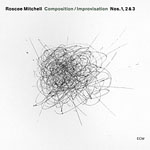 The distinction made between jazz and classical music is usually one of rhythm and artistic depth, of improvisation versus composition, of the player being the creator versus the player as interpreter. However, upon deeper reflection, the two musics both have composers and interpreters, with the difference being one of emphasis.

Saxophonist and composer Roscoe Mitchell has long worked in the space where the composed and the improvised coexist and merge. Composition/Improvisation Nos. 1, 2 & 3 is a glorious example of music that expertly combines the strengths of both. The players chosen for the Transatlantic Art Ensemble needed to be comfortable with reading precisely scored music, suggestively scored music and, of course, improvisation.

This group of players were chosen by Mitchell and saxophonist Evan Parker from both sides of the Atlantic. The goal was to record their music played live at a symposium on improvised music in Munich in September of 2004. Parker conducted and played his music one night, released as Boustrophedon (ECM, 2008) and Mitchell the next.

The instrumentation is unusual: six reeds and winds ranging from flute to baritone saxophone, a string trio, piano, doubled bass and doubled percussion, which is neither an orchestra nor a typical big band. Mitchell's artistic intent is to produce a coherent musical experience by exerting control both directly and indirectly. He thus tells the players at times precisely what to do, but also trusts them to produce coherency when he suggests rather than dictates.

The nine scenes collected on this recording were selected from three larger works, displaying within and between Mitchell's methods. The distinction between the composed and the improvised is at times clear, while at others uncertain, creating shifting sound worlds for the listener to dissect.

Of course, the purpose of the music is not to present a guessing game, but to express emotion. However, as the music moves from one pole to the other, its construction and degree of improvisational freedom becomes part of the resulting mood.

Mitchell's compositional control produces some amazing sounds and colors. The opening of "I" sounds like a modern classical orchestral introduction in the overall sound, but with each individual having the feeling of improvisatory freedom. At the other end of the spectrum, the free-for-all sections, especially in the middle of "III," get very dense and a bit cacophonous.

The music that sits in between typically has a single instrument playing against the band or part of it. There are lines played by clarinet, flute, flugelhorn and sax which many times use a limited note selection—one of Mitchell's compositional techniques. The best example of this is "VIII," which features Craig Taborn on piano playing a two-note, multi-octave "theme" that is picked up by other instruments, and is actually very lively.

In the end, as Mitchell says, "I don't call music anything but music." The interplay of the composed and the improvised works very well, making Composition/Improvisation Nos. 1, 2 & 3 a moving experience.