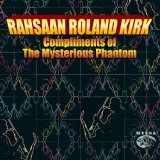 If Sun Ra was jazz music's Timothy Leary, then Rahsaan Roland Kirk was its Elijah.

Kirk, jazz music's most iconoclastic character, was also one of its most gifted. Once dismissed as a circus sideshow, he has seen his popularity, as well as his influence, steadily increase over the past twenty years. Kirk has been called many things'shaman, sage, charlatan, sideshow barker. But Rahsaan Roland Kirk represents the free spirit of jazz. He was a fearless improviser who invented his own instruments and played them all at once. He was most effective when playing tenor and flute, but made a good argument for his approach when he worked up a gale force, blowing four reeds at once (I note his last Hyena release, The Man Who Cried Fire and his variations on Paganini's 24th Caprice in Am, "Multi-Horn Variations.")

Compliments includes previously unknown and unreleased Rahsaan Roland Kirk. It is a collection of fragments and complete performances from his November 5, 1974 show at the Backdoor in San Diego, California. This appearance took place about nine months after Kirk recorded his landmark live recording Bright Moments.

In keeping with the artist's prophet status, these recordings, as well as those on The Man Who Cried Fire, can be thought of as the Dead Sea Scrolls of jazz. Kirk and company fade in on a hot "Passion Dance," only to cool down with a beautiful tenor rendition of "My One and Only Love." A superb juxtaposition of style and genre that characterized Kirk shows of the period (or any period). "Fly Town Nose Blues" is a flute blues that is very effective and swinging, albeit weird. Early '70s funk is in attendance with "Volunteer Slavery" and "Blacknuss," peppered with Kirk standards "Old Rugged Cross" and "Bright Moments."

Kirk's support is very good, but as in any Rahsaan Roland Kirk performance, the man himself is the center around which all revolves. He passionately referred to jazz as "black classic music" and never considered it anything less. Like Beethoven, Kirk elbowed his way to the front of the line and never acted as if he did not belong there. Kirk allegedly passed away December 5, 1977. That is certainly not true.