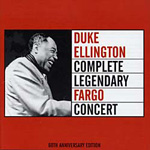 America's greatest jazz musician performing his own music on his favorite instrument—the orchestra—and not just any edition of Ellington's band but arguably his best, especially with bassist Jimmy Blanton and tenor sax great Ben Webster. What more could you ask for? An inspired performance? The band is tight and spirited thoughout this five-hour engagement. Faithful audio reproduction? The fidelity is miraculously close to being state of the art for a 1940 recording made on marginal equipment by hobbyists. Blanton's bass comes through with greater clarity than the bass frequencies on some of the studio recordings Charlie Parker would make ten years later.

So why is this recording being all but ignored, even in jazz circles where news of an on-location Coltrane or Monk discovery, or the appearance of another Bird-Diz acetate, manages to make waves even in the mainstream press? Unfortunately, as well-known as Ellington's popular songs are, his genius as a composer/orchestrator/bandleader remains poorly understood, despite the valiant efforts of Wynton Marsalis over the past two decades to educate the public.

Count this among Duke Ellington's three or four most important recordings, an absolutely essential listen for any Ellington fan or student of the evolution of this art form. Blanton's work on bass is a genuine revelation; Webster's solos on "Cottontail" and "Stardust" rival Coleman Hawkins' best work at the time; the horns of Johnny Hodges, Rex Stewart and Harry Carney are heard to optimal effect; compositions like "Ko-Ko and "Harlem Air Shaft" are miniature masterpieces, microcosms of Ellington's cutting-edge genius that invite attentive and repeated listening to be fully grasped and appreciated.

Admittedly, there are a few tradeoffs: the vocals of Ivy Anderson and Herb Jeffries are practically too faint to count; some of the numbers were rendered incomplete or interrupted while the amateur engineers quickly changed acetate discs. On the other hand, the listener has a sense both of being on stage with the band, with Duke calling off tunes in the background, and experiencing a continuous five-set performance by the orchestra—a remarkable feat for a recording made in 1940.

Although an elaborate 60th anniversary edition of this concert is available on Storyville Records, this Spanish import at half the price is professionally mastered and well documented. If you're new to Ellington, you might choose to pass up either recording for the time being. Start out with Ellington at Newport, Ellington Uptown, Blue Rose, Such Sweet Thunder and The Nutcracker Suite. But don't dare end the relationship without spending a couple of fruitful hours with the Duke in Fargo, North Dakota.