Miles Davis: Complete In Person Friday and Saturday Nights at the Blackhawk 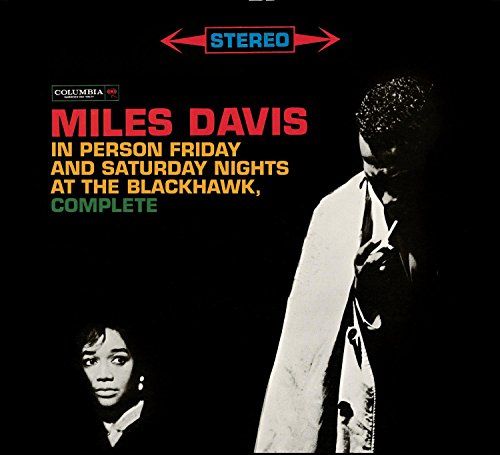 In terms of remote recording, jazz more than any other type of music is most naturally found in its creative element. Musicians are most apt to improvise freely without thought to time limits when on the bandstand, and the nonverbal communication with the audience can certainly boost adrenaline levels, which in turn increases the intensity of the performance. Of the many jazz legends who have recorded in the modern era, Miles Davis was documented in more live settings than probably any other of his peers, thanks in part to the healthy coffers of Columbia Records. As a result, we have a much better picture of Davis’ many classic ensembles over the years as heard “on the job.”

Back in the spring of 1961, Davis was in a period of transition. Tenor saxophone master John Coltrane had left the trumpeter’s employ to lead his own band and Hank Mobley had come on board to take his place. While the new tenor man had his own style, it was less radical than Coltrane’s histrionics and Davis was not always pleased with the end results. Still, the trio of Wynton Kelly, Paul Chambers, and Jimmy Cobb had been together for some time and the chemistry they shared was undeniably strong. It is this band that appeared at San Francisco’s Blackhawk, where all of the music performed on the weekend of April 21st and 22nd was recorded for prosperity.

Initially released in truncated form and with edited performances in some cases, the concerts have been expanded: for the first time we get to hear every recorded note, amounting to nearly four hours of music on four discs and with the best possible sound quality. Seven sets were recorded, with a total of 29 tracks being the net result. Thirteen of these have never before been heard, adding considerably to this cache of Davis memorabilia. There are several takes on familiar tunes such as “If I Were a Bell,” “I Thought About You,” and “Green Dolphin Street,” however each one speaks with an individual sense of creativity, a testament to the resourcefulness of each one of these talented musicians. Miles himself is in solid form, often playing with a mute and stretching out at length. Mobley spins some wonderful yarns despite some reed problems, although his melodic style is similar to Davis’ and as such there’s much less of a contrast between the two lead voices.

Packaging for this boxed set consists of two slim double jewel boxes housed in a hard cover outer box. Notes inside the booklet are nothing all that revelatory, with a reprint of the original liners and a brief remembrance by Eddie Henderson. While more exciting changes were to come for Davis and his ensembles, these two nights in San Francisco solidified his mainstream manifesto and are a valuable addition to the trumpeter’s legacy.