By BRUCE LINDSAY
January 11, 2019
Sign in to view read count 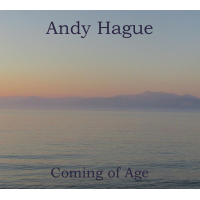 Hague, who has been performing for around 25 years, is joined by an experienced and sensitive quartet, saxophonist Ben Waghorn, pianist Jim Blomfield and drummer Mark Whitlam who all appeared on Cross My Palm, while bassist Chris Jones is new to the lineup. The five players form a cohesive, empathic, ensemble. Hague and Waghorn take the lead, but the rhythm section is equally vital to the band's sound; Blomfield's spacious, thoughtful, piano playing is often quite low in the mix, but rewards careful listening.

Although every track can be loosely described as "straight-ahead," there's plenty of variety within that definition, probably more variety than on Hague's previous release. At the fast-and-furious end of the spectrum there's "Stepping Down." "In The Bleak Mid-Autumn" is a slow, waltz-time number that captures the chilly stillness of the titular British season (particularly in Hague's own solo). The cool but swinging end is represented by "Abraham," inspired by a jam session in which Hague, Wynton Marsalis and assorted Lincoln Center Jazz Orchestra members participated. In the middle, the angular, bebop, "ICU" is a foot-tapper that opens with drum and bass interplay before Hague enters (with a cup mute on his trumpet), "The Displaced" mixes cool bass and fiery trumpet while "Sing It Loud" is a flowing, propulsive number.

Hague describes two of his compositions—"Coming Of Age" and "Conflict Resolution"—as "rock anthems." There may be a little bit of tongue-in-cheekness about those descriptions; there is a distinct lack of the bombast, strutting and vocal pyrotechnics that are usually de rigeur on such majestic musical works. Hague wrote "Coming Of Age" on the occasion of his son's 18th birthday. The rhythm section opens the tune before Waghorn then Hague make their entrances, sax and trumpet interacting, in Hague's words, "in the style of a boy/girl duet you might hear in a big Broadway show number." "Conflict Resolution" is probably the most beautiful of the ten tunes, a stately and occasionally mournful number that brings the record to a graceful close.