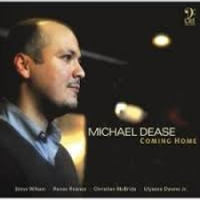 Trombonist Michael Dease's Coming Home is the evolutionary culmination of all of the small group work of which he has been a part. Dease's musical personality reveals itself fully on the disc, one he has populated with a very fine band and thoughtfully composed and selected pieces for that band. Dease's previous work as a leader on Dease Bones (Astrix Media, 2007), Clarity (Blues Back Records, 2008) and Grace (Legacy Jazz Productions, 2011), as well as with multi-reedist Sharel Cassity on Just For You (DW Records , 2009) and Relentless (Legacy Jazz Productions, 2009).

Where Curtis Fuller is the patriarch, Wycliffe Gordon the earthy keeper of the flame (and Dease's teacher) and Luis Bonilla the Latin soul of the trombone, Dease is its intellectual heart. Following his fellow Augusta Georgia trombonist teacher to Juilliard, Dease established himself as part of an ambitious group of young musicians who were combining smarts, chops, bandstand and practice and translating that into recordings. Members of this group include Sharel Cassity, trumpeter Carol Morgan, and pianist Orrin Evans.

Dease's compositional and performance approaches are ruled by passionate precision. His playing is exact and well practiced. His tone is expansive and uniform through all registers. These characteristics are demonstrated immediately on the opening tune, "Solid Gold" where Dease shows great velocity in both head and solo playing. He adds mass to this velocity, creating an infectious momentum when playing with a mute as on Duke Ellington's "In a Sentimental Mood." Tony Lustig drops in with his tenor saxophone for the piece giving it a throaty presence. Lustig adds foundation to "Good and Terrible" with his crack baritone playing. His solo is at once gentle and virile on this angular, post-bop piece. Alto saxophonist Steve Wilson turns the gas on high, navigating Dease's complex circuitry.

Dease rolls up his sleeves and gets his hands dirty on a searing performance of Oscar Peterson's "Blues Etude." While playing with his typical precision in the head, Dease begins to properly slur and wail in his solo, throwing off notes like pale blue sparks. He shares his solo space with bassist Christian McBride who amply demonstrates why he is Christian McBride and no one else. The instructive presence of pianist Renee Rosnes is heard throughout this fine disc as its timekeeper and drummer Ulysses Owens, Jr. Dease could not have put together a better band for this recording. He has come fully into his own as a leader.

Solid Gold; Motherland; Blues Etude; In A Sentimental Mood; Good & Terrible; Lifewish; The Shade Of The Cedar Tree; Just In Time; All Heath; The Release; Take It To The Ozone.