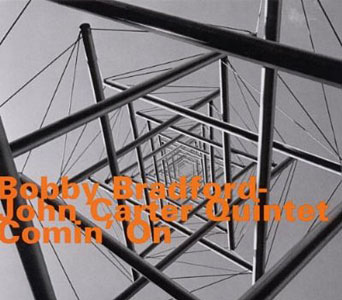 In a music industry that is for-profit by definition, the relative ignorance of history and the importance of musicians who made it historic borders on the criminally insane. How else could the complete disregard for contributions of Herbie Nichols by the industry be explained? Add to that a slew of greats who continue to be ignored by all but the cognoscenti. Musicians such as Bobby Bradford, John Carter, Billy Bang, Andrew Cyrille and Ed Blackwell, to name just a few—some living and others, regrettably no longer alive. For at least three of these names—Bradford, Carter and Cyrille—things ought to change, not least, because of the rerelease of Comin' On, a classic live set from 1988, when the three musicians were joined by keyboardist Don Preston and one-time John Coltrane alum, bassist Richard Davis, who also played on Eric Dolphy's legendary Out to Lunch.

This album, from Werner X. Uelinger's marvelous Basel-based contemporary music label, Hat Hut, renews interest in the revolutionary recordings made by Bradford and Carter almost forty years ago, because this concert from the Catalina, in Hollywood brought the two soul mates together after over a decade.

Few musicians—let alone trumpeters/cornetists—have consistently embraced the mandate for innovation like Bradford. An astute student of musical and cultural history, Bradford—like Ornette Coleman, coming from the hard-driving Texas blues scene—developed a highly expressive and uniquely vocal style of playing, celebrated in the burnished glow of his singularly evocative phrases and lines. Although Bradford's musical topography is dramatically different from Louis Armstrong, he nevertheless incorporated Pops' epic griot-like style into his own lyrical style, also brought the Coleman-evangelized Harmolodic musical idiom into his own musical language. Like few of his peers, he experimented not only with blurring the line between harmony and melody, but also in the bringing of an ecstatic kind of counterpoint to the epic architecture of his compositions.

Fellow Texan Carter was no less influential a musician, not only in the revolutionary sixties but in the decades since. After switching from alto saxophone to clarinet, Carter fine-tuned its woody sound and became another celebrated griot, developing his actively narrative style from a gravy of the blues. His playing with Bradford contains some of the finest dialogues in contemporary music.

Comin' On highlights the mature end of the Bradford-Carter relationship. Pitting his bronzed timbres against the woody ones of Carter's clarinet, Bradford drives the title track's edgy contrapuntal discourses, Cyrille, Preston and Davis creating a not-so-background swagger that elevates the song beautifully. The elegiac lyricism of "Ode to the Flower Maiden" is sublime. "Encounter" and "Room 408" sound exceedingly hip, even today. But it is the classic jam, "Sunday Afternoon Jazz Society Blues," which contains some of the most historic music on the album. With wild, preaching and brilliant vocalizing of their respective instruments Bradford and Carter make this a truly monumental date.