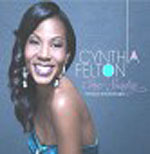 Vocalist Cynthia Felton turned a lot of heads with her debut, Afro Blue: The Music Of Oscar Brown Jr. (Self Produced, 2009), and her sophomore effort is bound to gain even more attention. While Brown is an important, if often overlooked figure, Felton ups the ante with her honoree of choice here.

Duke Ellington is considered by many to be the alpha and omega of jazz. Artists have been paying tribute to Ellington for generations with single song salutations and album-length nods, and Felton's work is a worthy addition to this lengthy list. Felton is the real deal, with a Bachelor's degree from Berklee, a Master's degree from NYU, and a Doctorate in Jazz Studies from USC, and her studious nature and stunning voice make for a winning combination. On Come Sunday she takes a baker's dozen of classics from the Ellington repertoire—including a pair of tunes from the pen of Billy Strayhorn, and two from Juan Tizol—and treats them with reverence, while still revising them to her liking.

A lengthy list of musicians appears on the album, and Felton handpicks her ensemble for each track. Sometimes a trio does the trick, as on the album opening "It Don't Mean A Thing If It Ain't Got That Swing." Felton soars over Terri Lyne Carrington's drums, as she introduces the song, and the trio hits a feistier tempo to let the song play out, with some killer scatting and drum soloing adding to the excitement. Pianist Donald Brown, bassist Robert Hurst and drummer Yoron Israel are on-hand for two of Ellington's most recognizable ballads. "In A Sentimental Mood" is underscored by some slow-dancing toms, along with added percussive touches from Munyoungo Jackson, while "Sophisticated Lady" slowly saunters along in classy/classic fashion, with Brown's glistening piano work a treat on both tracks.

In other places, Felton prefers the clarity that comes with a single accompanist, as on the jaunty bass-vocal performance of "In A Mellow Tone" and the brighter-than-usual take on Strayhorn's "Lush Life"—which pairs her up with the great Cyrus Chestnut. When the album briefly detours from the secular to the sacred, on "Come Sunday," the pianist proves to be the perfect foil for Felton's expressions.

Horn players have their place here, too. Jeff Clayton adds a jumping alto solo on "Perdido," and he's joined by trumpeter Nolan Shaheed on "Duke's Place (C Jam Blues)." Tenor saxophonist Ernie Watts and trumpeter Wallace Roney fly atop a thick percussive stew on "Caravan," and both men get some space to solo. Roney returns, mute in horn, for a contemporary, R&B-tinged "Take The A Train" and a slow "I Got It Bad." Even harp has its place here, with Carol Robbins adding some gorgeous touches on "Prelude To Kiss."

Though it's easy to focus on the accompanists, Felton usually serves as the focal point and she's never short of mesmerizing. Superb intonation and phrasing, strong scatting skills and an easy mixture of straight-up jazz, R&B and gospel make for a winning combination. Come Sunday: The Music Of Duke Ellington is Grade A jazz for any day of the week.

It Don't Mean A Thing If It Ain't Got That Swing; Caravan; In A Sentimental Mood; In A Mellow Tone; Lush Life; Perdido; Come Sunday; Take The A Train; I Got It Bad; Sophisticated Lady; I'm Beginning To See The Light; Duke's Place (C Jam Blues); Prelude To A Kiss.