Winard Harper: Come into the Light 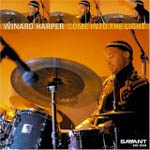 Come into the Light is Winard Harper's first live recording as a leader and the disc captures all the excitement and diversity the drummer's band delivers in its regular engagements. Recorded live at Cecil's Place (the Jersey club opened by drummer/producer Cecil Brooks III), the date features Harper's regular band of talented players, none of whom who have yet gotten the opportunity to record as leader, despite their obvious capabilities. Patrick Rickman is easily one of the most exciting trumpeters on the scene today and tenor saxophonist Brian Horton is a powerful hornman with a soulful sound all his own; Jeb Patton and Kelvin Sholar, who share piano duties, have proven themselves with the Heath Brothers and the Fort Apache Band, respectively; bassist Ameen Saleem proves himself to be a fine composer as well as a rock solid timekeeper, and Senegalese percussionist Alioune Faye exhibits excellent expertise in jazz and African rhythms. Harper continues to develop his formidable technique and mature taste and displays impressive leadership qualities in his choice of material and musicians.

Beginning with unheralded D.C. pianist Rueben Brown's "Float Like A Butterfly," the band displays its Jazz Messenger roots with Harper and Faye's polyrhythmic undercurrents propelling the horn solos that culminate in a hand drumming tour de force, leading into Sholar's AfroCuban statement which is followed by the leader's own dynamic solo and exchanges with the horns. Brown's original arrangement of Freddie Hubbard's "Little Sunflower" continues the Latin groove with Horton switching to soprano and Rickman to flugelhorn. Harper's "Divine Intervention" highlights his own considerable compositional skill in a fiery exposition reminiscent of Lee Morgan and Hubbard with an arrangement that features his melodic drum intervals.

Patton and Saleem both shine on a trio feature of Tadd Dameron's "If You Could See Me Now." Rickman's "911" begins darkly with a minor Middle Eastern melodic line and then charges straight ahead explosively. Patton's "T.F." is a bluesy dedication to the great Tommy Flanagan. Horton's "Specimen A" has the group settling into an easy groove that is continued on the relaxed reading of "Polka Dots and Moonbeams" and the medium tempo bounce of Freddie Green's swinging "Corner Pocket." Harper commences his composition "Come into the Light" with a solo balafon introduction that highlights the exotic melody. The concluding "Korinthis" by Saleem is an upbeat happy blues that gives everybody an opportunity to shine. Typically, Harper and company deliver throughout the kind of music that makes for a pleasant night out in a club. This disc lets listeners recreate that enjoyable experience at home.