Jane Monheit: Come Dream With Me 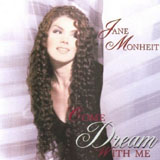 Though critics have accused her of sticking close to her predecessors and playing it too safe with her material and delivery, Jane Monheit has grown up a lot in one album and is truly ready to spread her wings and take her place among the new generation of jazz vocalists. Disovered by master producer Joel Dorn, Monheit has also caught the ear and attention of legends such as Kenny Barron, Michael Brecker and fellow young lion Christian McBride, all of whom perform on this lovely and highly listenable album. From the breathy opening verse of the American standard "Over the Rainbow" to the more exploratory reading of the Canadian should-be-classic "Case of You," Monheit stretches both her repertoire and her expressions on this second album.

With the help of Barron and McBride, Monheit keys her ways through standards such as "I'm Through With Love" and "Blame It On My Youth" (which features a fittingly remorseful trumpet line by Tom Harrell), then enlists Richard Bona to strum her through Bread's "If." Bona also sets the tone for a triumphant tackling of the twisting tongue tango "Waters of March," which is a challenge in itself. To prove the extent of her growth, Monheit closes the album with a juvenile rendition of the opening track, but there is much more evidence of her artistic development throughout.

So for those frustrated musicians who have nothing better to do than nay-say what may indeed be the next big thing, take Monheit's invitation and dream along.

Over the Rainbow; Hit the Road to Dreamland; Spring Can Really Hand You Up the Most; Waters of March; I'm Through With Love; I'll Be Seeing You; Something to Live For; So Many Stars; If; Blame It on My Youth; A Case of You.