By DOUG COLLETTE
January 19, 2019
Sign in to view read count 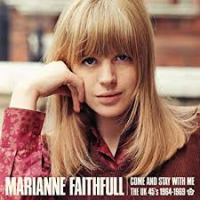 If Come And Stay With Me proves anything, it is that Marianne Faithfull was hardly the mere waif she appeared to be during her initial rise to fame. This collection of her earliest work, comprised of the A and B-sides of UK Decca singles plus the Go Away From My World EP, suggest a resilience borne out by the longevity of a career still in progress (her latest album, Negative Capability (Panta Rei, 2018) came out last September).

In a lengthy essay populated with more than a few direct quotes, journalist and fan Kris Needs laces descriptive, informative prose with an arch humor as subtle as Faithfull's singing on her most famous tune "As Tears Go By." The careful vocal phrasing there mirrors the staunch attitude this resolute artist displayed in her later years, not to mention the durability of her work both vintage and recent. At the same time, those artistic attributes contrast the fragile beauty captured in so many photos within the enclosed twenty-four page booklet.

On the song composed by Rolling Stones 99 Mick Jagger and Keith Richards, via the manager they shared, Andrew Oldham, baroque strings surrounding Faithfull's voice are as suitable as the folk-rock touches supplied by guitarist Jon Mark on the traditional "Greensleeves" and Donovan's "The Most of What Is Least." And even as she sounds virtually hopeless during her take on Bob Dylan's "Blowin' in the Wind," where the orchestration sounds ready to sag under its own weight, the alternately haunting and solitary tones of her voice belie the woman's perseverance over the years.

The harpsichord is as slyly seductive as the persona Marianne Faithfull radiates on "Come Stay With Me," and subsequent song titles not only elaborate on an image she and her managers conjured up, but also tell a virtual story all on their own over the approximately one hour playing time. "What Have I Done Wrong," "Go Away From My World" and "I'd Like to Dial Your Number" are chapters in a tale rife with emotional dualities, mirrored in the production, the monaural clarity of which ebbs and flows over the course of these twenty-two cuts, many of which hover around the two minute mark.

In lieu of comprehensive musician credits, a a smattering of casual references to recording session personnel appear in the aforementioned essay. There are, however, noteworthy assignations included for songwriting, production and musical direction, most conspicuous among which are Mike Leander (who worked with The Beatles on "She's Leaving Home" in producer George Martin's absence during Sergeant Pepper' Lonely Hearts Club Band (Capitol, 1967)) and Jack Nitzsche (a studio collaborator with Phil Spector and Neil Young, among others).

Marianne Faithfull's latter-day explanation of the Stones' guitarist's advocacy on her behalf for authorship (and for compensation) of the lyrics on "Sister Morphine" almost begs the question of why only Stones drummer Charlie Watts ever appeared on work of hers (the iconic band's lead vocalist produced the aforementioned tune, too); certainly their loyalty to blues and nascent pop savvy at the time of these recordings might well have expanded both sound and style so that The UK 45's 1964-1969 would not sound so homogeneous from start to finish (the ever-so-quick flash of Dixieland horns on ""Is This What I Get for Loving You?" is a marked exception).

That said, it's impossible to deny the chilling effect emanating from this take on her composing collaboration with the Glimmer Twins. A subsequent rendering on Sticky Fingers (Rolling Stones Records, 1971) sounds superficial in comparison to this concluding cut, the fearsome force of will within it an aural corollary to Marianne Faithfull's creative profile in courage.

As Tears Go By; Greensleeves; Blowin’ In the Wind; House of the Rising Sun; Come and Stay With Me; What Have I Done Wrong; This Little Bird; Morning Sun; Go Away From My World; The Most of What Is Least; Et Maintenant; The Sha La La Song; Summer Nights; Yesterday; Oh Look Around You; Tomorrow’s Calling; That’s Right Baby; Counting; Like To Dial Your Number; Is This What I Get For Loving You?; Something Better; Sister Morphine.