Vosbein Magee Big Band: Come and Get It!

By JACK BOWERS
September 28, 2019
Sign in to view read count 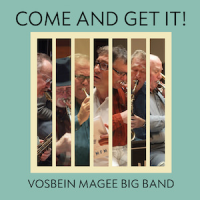 One conclusive way to appraise an album—big-band or otherwise—is by the emotional response it arouses in the listener. Come and Get it!, the debut recording by the Virginia-based Vosbein Magee Big Band, gives rise to warmth and happiness for a number of reasons, not least of which are an unbroken series of bright and impressive themes, as well as the band's earnest and admirable performance before an appreciative audience at the historic Washington & Lee University in Lexington.

The Vosbein here is Terry, composer, arranger and guiding force behind the ensemble and its genial point of view. The Magee is Chris, the band's co-leader and dependable lead trumpet player. Vosbein is responsible for nine of the album's fourteen good-natured numbers, alto saxophonist Greg Moody two ("Delta Queen," "Holly Marie"), Magee one (the flag-waving "Been There, Done That"). The others are Janis Ian's ballad "Seventeen" and the school-song finale "Washington & Lee Swing," both neatly arranged by Vosbein. Five of Vosbein's originals have a French patois, as they were written while he was living in Paris.

It all begins with a brace of impressive themes by Vosbein: the album's irrepressible title selection, superbly engineered by the ensemble to complement crisp solos by Gallops, Magee and trombonist Tom Lundberg, followed by "I'm Gonna Tell You Something," a Latin charmer on which Lundberg, Magee and Hitchcock share solo honors. At the concert's other end are Ian's sumptuous "Seventeen," on which Lundberg, Magee, Artwick and tenor Justin Berkley solo, and "W&L Swing," underlined by Sanderl's in-the-pocket drumming. Come and Get It! is a big-band session in the best sense of the phrase, and as such is warmly recommended.

Come and Get It!; I’m Gonna Tell You Something; Delta Queen; Reflections; Je ne sais quoi; Takin’ a Walk; Le Metro; Nostalgia; Been There, Done That; Holly Marie; Latin Quarter; Revelry on Rivoli; At Seventeen; Washington and Lee Swing.