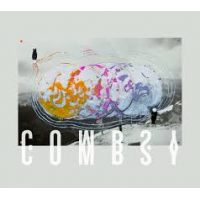 It does no disservice to Combsy or the man who made it to state how favorably it compares to the most recent work of the Jacob Fred Jazz Odyssey in terms of both style and quality. Multi-instrumentalist and composer Chris Combs was integral to the concepts and production of The Race Riot Suite (Kinnara, 2011) and Worker (Royal Potato Family, 2014), so it's only natural work under his own name would so vividly reflect those approaches.

The self-effacing charm with which this record is titled suggests an informality its two scrupulous recording sessions (in Little Rock, AK and New Orleans, LA) belies. But, in reality, the album represents something of a retrenchment, the likes of which artists must often enact as a means of moving on to greater ambitions. Thus, the horns that lurk in the background on "Versus" and emerge to the foreground through ambiance on "Cosmic Trigger" simultaneous hearken to JFJO and extend the group concepts. In so doing, Combs has set the stage for further utilization of such arrangements.

The man's own guitars and lap-steel will no doubt remain prominent and rightly so. The razor edge he wields on "Joshua Tree" is an uncommon facet of jazz records, contemporary or otherwise, and it distinguishes him and the sounds he creates by its very presence. Then there's the skills he exhibits handles the instruments, whether outside the realm of convention during "Villain" or further outside tradition like on "1939." All this adept action of his is as evocative of May Yang's cover art inside and outside of the package.

And Chris doesn't just mix up the production settings on Combsy, either. He alters the track sequence to highlight the varied nature of the material as well. So, in contrast to the latter mentioned title, evocative of the year in its name, there's an ominous insistence in the air of "East Tulsa Stomp." But the carefully crafted atmosphere of such a cut doesn't preclude vigorous musicianship, such as the sax solo from Brad Walker or the unified glide by which the entire ensemble moves so gracefully through the dramatic "Times Are Hard for Dreamers."

At the same time, the languorous likes of "So Long Uncle Walter" is a comforting juxtaposition, so much so that, upon repeated listenings, it becomes emblematic of the varied expertise Chris Combs brought to bear on this first solo album of his. The logic of his work in fact belies the name of its concluding track "Reticent:" the reality is, this recording artist's forthcoming approach only whets the appetite for more of his work, on his own or within the collaboration of a group.