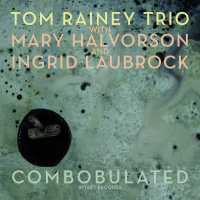 Recorded live at Firehouse 12 in New Haven, Connecticut, Combobulated constitutes the fourth outing for what might be now seen as a free jazz supergroup, even if it wasn't when they cut Pool School (Clean Feed, 2009). The stars of saxophonist Ingrid Laubrock and guitarist Mary Halvorson have continued to rise in the intervening years, while drummer Tom Rainey has been at the top of the game since the early 1990s. While the group plies its trade under Rainey's banner, it's an egalitarian outfit that specializes in on-the-fly excursions which can be as visceral as they are cerebral, and more often than not, both at the same time.

That's certainly the case in the lengthy title track, whose trajectory can be traced in Laubrock's journey from lyrical to abstract to wild, typical of her ability to strike a diversity of expressive stances. They conjure tremendous excitement towards the close as Laubrock's overblown tenor chunters and then heaves hearty blurts against a drum/guitar wall of sound. She's prominent also on "Isn't Mine" both in the delicate exchanges with Halvorson which open the piece, as well as the later chirruping line pitched against a rhythmic throb.

Halvorson is characteristically inventive throughout, though with particular emphasis on textures which means that she's cast in a more supportive role than usual. For his part Rainey is crisp, precise and inspired, creating an insistent non-linear pulse. He varies his attack from moment to moment, most obviously on "Fact," which cuts between heavy metal thrash and ticking cymbals.

Perhaps after a decade with the same lineup, which also overlaps with numerous other ensembles, there's a perceived need to update the formula. Rainey scratches that itch in conjunction with producer (and sometime guitarist) David Torn, by introducing some post-production tweaking, which not only edits the live improvisations, but also noticeably alters the sound too in some places. Of course it's impossible to gauge the exact extent of any modification, even more so as Halvorson's style is based so heavily on her idiosyncratic use of FX pedals. But it's a safe bet when the sonic signature of the drums changes radically, as it does on "Fact" (trebly and reverberant) and "Torn Road" (overcooked and distorted), that it's down to studio manipulation.

Enhanced or diluted? That depends on whether you are looking for a document of a performance or treat the CD as an artifact in its own right. This writer would have been happier with a consistently natural sound. Not everyone will agree or care, and for those that don't this remains a top notch date.