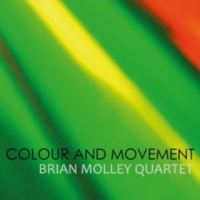 Twelve tunes in twelve keys and twelve time signatures form the body of work that makes up Colour And Movement, from Scotland's Brian Molley Quartet. Lest the previous sentence makes the album sound too much like a somewhat esoteric musical exercise, it's important to add that Colour And Movement is richly textured, high on melody and filled with readily accessible music.

Colour And Movement is the quartet's follow-up to debut album Clocks (BGMM, 2013). There's no change to the lineup—as before, Molley gets sterling support from pianist Tom Gibbs, bassist Mario Caribe and drummer Stuart Brown. Molley makes it clear that he didn't start out making the album with the idea of organising it in this way, deciding on the structure as recording progressed and it became possible.

Molley spends most of his time on tenor or soprano sax, with occasional forays into flute ("A Borboleta"), clarinet and bass clarinet. The soprano is a fine choice for the jaunty "Picayune Slinky." The tenor emphasises the late-night cool of "Jacksonville" and the melancholy of "The Pushkar Push," a tune which displays the control and delicacy of all four musicians.

Alongside Molley's own compositions are two standards, Arlen and Mercer's "That Old Black Magic" and Duke Ellington's "Solitude"—a short but warm rendition featuring Molley's overdubbed wind instruments—and the lesser- known "Cheer Up Charlie" from Leslie Bricusse and Anthony Newley. All three fit seamlessly into the track list. "Cheer Up Charlie" is another melancholy number, once more highlighting the talents of the quartet.

Hours of harmless fun might be had from attempting to identify the time signatures and keys, but such an exercise isn't compulsory. Listening, grooving quietly and possibly attempting to cut a rug are better accompaniments to the music on Colour And Movement.