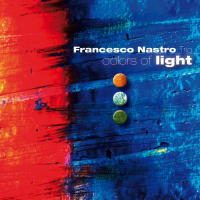 As soon as one lets Francesco Nastro's fingers fondle those keys the way he does on "E all'Improvviso il Sole," the musical geometries that create Colors of Light finally come to life. The music springs from a cocoon-like environment in which pianists the likes of Bill Evans and Brad Mehldau must have forgotten their instruments around, which are by now subject to Nastro's gentle manners. It is jazz alright but, even more importantly, this is a study in melody; an elegant mission to surrender the method to the pureness of the musical gesture. "Clicks of Life," "Shades" and "Thinking Silent" contain the introspective coordinates of the album, with their soothing, thoughtful and fluid swagger.

The rest, on Colors of Light, although radically different (the placid stride gives way to the brilliant rhythmic work of contrabassist Chris Jennings and drummer Giuseppe La Pusata), follows the mellifluous aesthetics of the numbers mentioned above. The pace is altered, halved and the space between the beats expands, but the melody, the harmonic attributes remain, thus contributing to making the album a consistent and rational piece of art.

Nastro's predilection for simplicity reveals itself in the outstanding work dedicated to the carefully dosed accents in his music. Details such as the sinuous melodic lines that shear through "One More Bit" or "Let Me Tell You," or the wise use of different timbres make the trio's music evolve around uncomplicated foundations, thus allowing this simple stream to flow without apparent obstacles. "Accessible," in jazz, is all too often associated with the shallow and the shabby. But few artists manage to venture into this minefield of a realm with grace and dignity without letting the easy and shiny sequinned path ward off their inspiration. Despite his relatively young age, Francesco Nastro is undoubtedly a master in the cunning art of getting dangerously close, and yet so immensely far from artistic temptations.

For those of you who already know Chris Jennings and his excellent work with his quintet and the Drum'n Koto Trio, his taste complements Nastro's melodic choices by keeping the tunes together. His work as the glue of the trio is better summarised by his brilliant job as the one element that keeps the melodic lines flowing when digressions take over and Nastro and La Pusata follow the advice of their Italian temperament.

It is an album on a miraculously precarious balance that will make purists look further, thus confirming the validity of the work. Catchy, daring and enjoyable, Colors of Light is a melancholic joy to listen to. Whatever your mood, its colourful palette is there for the listener to draw the right atmosphere.