By JOEL ROBERTS
December 1, 1999
Sign in to view read count 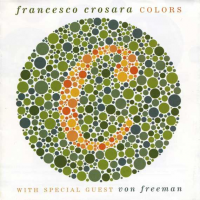 On his impressive new album, Colors , Francesco Crosara proves he is a pianist with expert chops and broad interests.

Born in Italy and based now in Chicago, Crosara has an awareness of world music but a firm grounding in the modern jazz vernacular. His major piano influences are unsurprising: Herbie Hancock and Chick Corea. Like them, he has an interest in electric as well as acoustic jazz. On several numbers he switches to the recently resurgent Fender Rhodes piano, with very satisfying results. With Crosara on the Rhodes, the beautiful ballad "Someday My Prince Will Come" takes on a surprisingly funky, almost acid-jazz feel. The album's most ambitious number, "Suite Venus," is an original dedicated to Corea that traces Chick's musical evolution on both acoustic and electric pianos. Crosara also offers a splended 11-minute version of Hancock's "Dolphin Dance."

There's a little bit of everything here: thoughtful solo piano (a lovely rendition of "Spring Can Really Hang You Up the Most"), hard-driving small-group jazz, even a Portuguese language vocal by guest singer Claudia Perez. An added highlight is the presence of Chicago tenor sax legend Von Freeman on several tracks. Freeman's warm tenor sound and Crosara's gentle touch at the piano meld together seamlessly.