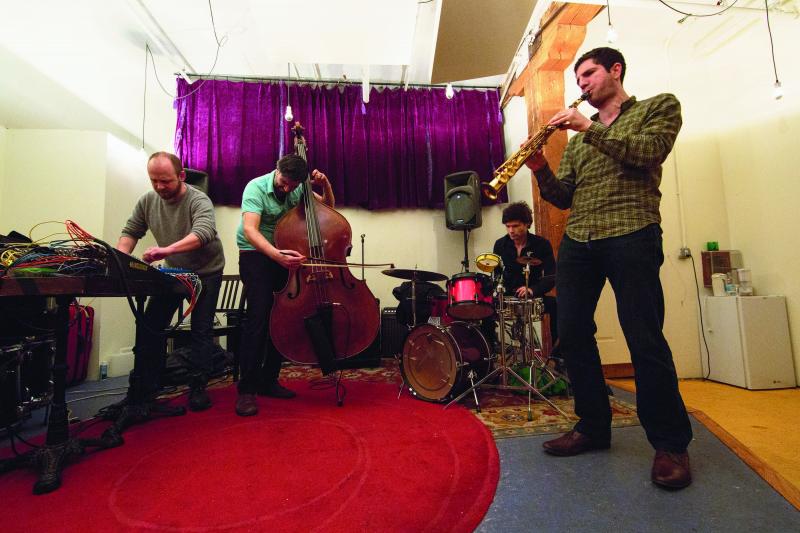 In the wintry wasteland, the new-ish Trans-Pecos venue did not seem to boast a particularly peachy set-up. It may or may not still be operated by Todd P, normally known as a promoter of slightly swerved rock outfits, and there were tales of this old Silent Barn-owned hole having some kind of bar. Now, there seems to be no licence for booze, and no cash for heating in this ultra-ascetic space. The lighting is also almost non-existent, but that's more of an artistic choice, proving that some spartan elements can have positive results. Even the floor is mostly bare, scattered with functional wooden stool-plinths. Trans-Pecos is located in Ridgewood, Queens, technically, but not far from Brooklyn's Bushwick, and very close to the L train subway. Even so, the desolate landscape doesn't offer a nearby bar alternative, or many eateries, so this is a joint for the (extremely) dedicated alternative music enthusiast. Psychological barriers had to be surmounted. So, despite initial misgivings about having made a serious bad choice of evening entertainment, once the performers jacked up, the night was saved.

The central performance came courtesy of Colonic Youth, who were the odd ones out, bookended by a pair of electronicists, each cohabiting the stage with a more traditional instrumentalist. Not that this quartet don't feature an electronics specialist, in the shape of Philip White, it's just that their sounds spring out of an improvised jazz/rock/noise burrow, rather than a more studied academic hole. White's three cohorts are more known in jazzing quarters: James Ilgenfritz (upright bass), Kevin Shea (drums) and Dan Blake (saxophones and, this time, bagpipe-y and double-reed relics). Their set was cutting and concise, like a delicacy of extremity, played as a single piece, or eruption, that was presumably improvised. Ilgenfritz can often be witnessed in more studied, or even moderne classical, outfits, but when caught within these ranks, he plays at his most physically brutal limit, flaying the strings to bruise, thrumming up a blurring stanchion of solid, deep resonance. White favoured the lower end of electro-rumble too, often working in tandem with Ilgenfritz, doubling the low frequency tension, but still splicing apart from the bloodied acoustic strings. Split-brain thundering ensued. Meanwhile, Shea was a smearing of stick-fluidity, scattering close-knit beat-ratchets liberally, ever in motion, sutured to his cohorts. Blake mostly stuck to soprano saxophone, but made bleating diversions on a very rural-looking bagpipe, like something from the Galician hills, and a reed-pipe that could have arrived from either India or Morocco. Near-demonic darkness cloaked any details. This gig almost acted as an album release party for the very fresh "Fountain Of Youth" (available on Ilgenfritz's Infrequent Seams label), but we're not talking about any expected celebratory sounds, as this foursome hurtled into the sonic abyss. It was unremitting and exhilarating, as inwardly-bound bone-grating tension conflicted with a rush of orgiastic chemical release. The motion was kept in suspension, fluttering like a bloated, dripping turd of power. And they call this jazz? Well, probably, they don't, but the extended flood sounded very much a part of improvisation, vaguely descended from the distant funeral stomp of New Orleans, glorious in its polyphonic scream.

By way of complete contrast, the following evening found the embracing Jazz Standard basement hosting a large ensemble who were devoted to the reproduction of tunes from a bygone age, enfolding the pre-Yule capacity crowd in the warmth of golden-hued nostalgia. This is the band that played for the hit Broadway musical After Midnight, well accustomed to cosseting singers such as Patti Labelle and Tony Bennett. For this one-nighter, they'd invited Catherine Russell to guest, one of New York's finest vocal interpreters of songs from the classy age of jazz. Andy Farber was a genial host, keeping the gathering informed regarding who was soloing, and generally exuding an aura of approachable chattiness. His attention to saxophone and flute was mostly distracted, as he was kept busy enough with conducting duties. The 19-strong combo's key soloists included saxophonist Dan Block, trumpeter James Zollar and trombonist Art Baron.

The svelte sound was crisp and tight, coasting through "Air Check," and a new piece, "Don't Tell Me What To Do." Neal Hefti's "The Odd Couple" shone out with a sprightly reading, then Block and Baron delivered concisely expressive statements on "Short Yarn," an anagram of Billy Strayhorn, Farber joking that he's resisted the alternative "Horny Rats" possibility when titling his tune. Russell appeared for a significant portion of the set, not just sticking around for two or three numbers. She added a desirable element to the repertoire, moving the set-list into a second phase with "Public Melody Number One," "Just Friends" and "I Can't Give You Anything But Love, Baby," easily floating across the softly swinging wave-bobbing. The plastic bowler hat mutes came out across the trumpet section, caramelising their soft parps, and Farber saved the last song for himself, silencing any Frank Sinatra resonances by tackling Cole Porter's "I've Got You Under My Skin" as an instrumental, replete with his own saxophonic flow, giving it a treacly tenor licking.

Once again, on Christmas Eve, another basement joint was bustling, as Israeli (but NYC resident) bassist Tal Ronen led his Holy Moly crew towards midnight, playing a pair of sets. The young leader is much less familiar than some of his sidemen, who are key figures on the old school jazz scene, namely cornettist Jon-Erik Kellso and pianist Rossano Sportiello. The remaining band members are alto saxophonist Jay Rattman and drummer Steve Little, these two surprisingly not hitherto known to your reviewer, although the former is an Ear Inn regular and the latter is a veteran of the sticks. Ronen was set on giving precedence to a dissection of Irving Berlin tunes, amongst other contemporaries, as his way of side-stepping a seasonal repertoire, but still allowing the audience a comforting sense of recognition. Ronen's thin, high string-sing was a featured part of most numbers, the privilege of a bassman leader. No one was complaining, as each sweet segment slid out in the aftermath of horn and key spotlights.

"I'm Putting All My Eggs In One Basket" and "On The Sunny Side Of The Street," were taken at a spry trot, and singer Tamar Korn, a star of the NYC 78rpm shellac scene, guested for more than the usual quota of songs, hanging around to impose her individual style on the material. Korn has a high-ranging, sweet soar, harking back to a 1930s winking innocence, but she also turns aside from the lyrics to impersonate musical instruments, not exactly scatting, but mimicking the actual sound of a trumpet or violin. During "Wrap Your Troubles In Dreams" she took on the nature of a bendy musical saw, a ghostly Yule sound indeed, alternating her phrases with Ronen's brief bass statements. Then she suddenly became a muted trumpet changeling. Rattman mostly concentrated on his clarinet, whilst Sportiello maintained a trinkling fluidity. Little preferred an understated stoking, a gentle momentum, snicking minimally during his occasional solo outbreaks. Korn returned in the second set for "Blue Skies," as Kellso topped off with a sparky muted solo. This was a revivified songbook of nostalgia, but these ditties have never really departed, always sounding completely relevant, especially when interpreted by such a devoted group of classicists as this hotly swingin' Holy Moly bunch.

Cuban reedsman Paquito D'Rivera plays frequently around NYC, and has also visited Broadway's Iridium club on a regular basis. This collaboration found him in a less usual setting, holding hands with the Brazilian Paquito D'Rivera e Trio Corrente, who aren't so well-known outside of their homeland. Ticket sales can go either way during the holiday period, but both sets on this evening were either completely sold out, or very nearly so, with a noticeably warm and celebratory atmosphere in place. This gig was actually booked by club manager Thomaz De Castro, who is also a son of Brazil. D'Rivera recorded an album with Corrente, Song For Maura, (Sunnyside, 2013) its title composition dedicated to the memory of his departed mother, so this was a relatively rare opportunity to hear the participants re-visit their collaboration.

The Paulista trio opened each set without D'Rivera, establishing their own mood of sleek Brazilian forms, looking at most of the country's indigenous musical styles, but passing them gently through their own jazz sensibility, laying a single cloaking personality over all of their twists and turns. D'Rivera entered on alto saxophone, engaging in a shuffling jazzsamba, overblowing sweetly during his first solo, taking a tart edge, but only just rising up out of the smooth flow. Bassist Paulo Paulelli switched from six-string electric to acoustic upright, delivering a completely solo stretch, adding percussive raps to the sensitive soundscape. Then, drummer Edu Ribeiro offered his own solo, keeping a samba feel, but making it of purer stock. D'Rivera switched to clarinet for "Maura," and then vacated the stage, allowing the trio some more space for their own material. Manager De Castro whipped out his pandeiro (Brazilian tambourine) for a guest spot, and D'Rivera returned for a chorinho on clarinet. The second set found him impersonating the cuica (Brazilian friction-drum, with its distinctive rubbed string hidden inside) on his clarinet, then whisked through a frevo-styled number and the love theme from the Black Orpheus movie. His tone seemed to become silkier as the set progressed, the entire evening coasting just the right side of being overly smoothed-out, ultimately turning into a delicate examination of Brazil's complete musical spread. Well, aside from rap, punk and extremist electronica...