By MARK CORROTO
November 10, 2007
Sign in to view read count 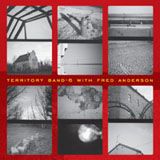 Collide is Ken Vandermark's sixth release for his transatlantic small big band (or is it a large small group?) of American jazz meets European improvisers. Unlike the prior sessions, this disc is comprised of a single composition, divided into five parts.

The Territory Band has, at its core, players who execute Vandermark's writing with a satisfying proportion of improvised and ensemble playing that has as its contemporaries bands like the Brötzmann Tentet, the ICP Orchestra, and Barry Guy's LJCO. Vandermark has always acknowledged these bands, but this recording brings to mind another band that had ties to his Chicago scene. The music heard on Collide is solidly in the tradition of Sun Ra's vision.

The five-part composition, recorded live in 2006 at Chicago's Millennium Park, opens with a spirited swing. This kind of acknowledgment to jazz history finds Axel Doerner playing some blues-inflected trumpet over the composed parts, only to open things up to the strings of cellist Fred Longberg-Holm and guitarist David Stackenäs. Certainly the crowd felt the groove as saxophonist Fred Anderson strolled into "Part 2, and we hear his signature tenor sound blowing huge notes. The world twists in an odd direction with Lasse Marhaugs electronic accompaniment, a sort of burning electronics akin to a G.X. Jupitter-Larsen' deconstruction. The tradition has morphed, as suddenly the group's swinging is challenged by the digital future. Never fear, the composed section and its beat returns. Anderson deals with the electronics and the ensemble, soloing in front and over the energy systems created.

Part 4 is the culmination of the piece, with the band working at full strength. Vandermark's composition is tested, expanded, and driven hard here. To his credit the music, held together by dual percussionists Paul Lytton and Paal Nilssen-Lovem, is never confused nor does it dissolve into chaos. The last part opens with the drummers calling the session to conclusion. The music churns, not unlike a Brötzmann Tentet, but the true spirit is that of Sun Ra and his love of all things ceremonial. Did the musicians have the urge to parade through the audience carrying Fred Anderson on their shoulders? I bet they did.