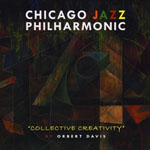 Defining the fine line that often borders jazz and classical music has elicited much debate. One musician has even registered the word "jazzical" as a term that insures the framework in which the music he writes will be perceived.

But trumpeter, studio musician and composer, Orbert Davis does not need to think this way. He simply designed Collective Creativity, the fifty-five piece Chicago Jazz Philharmonic's debut album, wrote most of the music, and put it out there. Only in the liner notes, does he pose the question "Is it jazz or classical?" There is but one answer to this question; how the music sounds. And the music here blasts through any kind of nomenclature to become its own entity.

The initial fanfare and thematic-setting brass excursion rolls out the red carpet for the adventure, as Davis opens and closes with a bit of history in "West End Blues" (Oliver/Johnson), "Weatherbird" (Armstrong) and "Goin' to Chicago" (Basie/Rushing). Between these brackets, explicitly rooted in jazz music, is the centerpiece. Davis's nine-part "Collective Creativity" suite unfolds a sonic narrative, revealing the musical sources, artistic energies and instrumental expressions that conjoin to elevate his formally composed music into a classy act.

The five-minute overture, "Diaspora," enlivened with a spate of vibratos from the flutes and violins sounding like birds on the wing, is extraordinarily musical and lyrical. Nothing but joy and celebration comes from the orchestra; several solos uncover the stepping stones to emotion, emphasized by Nicole Mitchell's well-placed flute interjections and sax solos, most likely (but uncredited) from Ari Brown, Ed Wilkerson and Mwata Bowden.

Three brief interludes inserted among the sections of the suite—"The Creation of Evolution (part 1)" involving didgeridoo, flute and solitary sax, "(part 2)" a wooden flute and high-pitched chimes, and "(part 3)" strings and sax—ease the conceptual transitions from a seemingly primal mode to contemporary forms that constitute the potential of the orchestra, particularly in the context in which Davis had placed it.

The sequence of Davis's suite is born of intuitive logic, where he exposes an awareness acute enough to explain how music can evolve. Linking to the innovations of the Association for the Advancement of Creative Music (AACM), from which he has borrowed Mitchell, Brown, Wilkerson and Bowden, Davis grows his music from a cogent, mindful integration of instruments, even if that means using strings, which he does artfully, primarily with the flute ("Seraphim"). Quoting Stravinsky's "The Rite of Spring" early on in "One Thousand Questions, One Answer," and basing "An Afternoon with Mr. Bowie [Lester](part 1)," on the "Berceuse" (lullaby) section of Stravinsky's "Firebird Suite," Davis claims the freedom to mix classical statements with bop and blues structures.

The conclusion of the suite, "Vice Versa," summarizes Davis' intent, featuring instrumental solos from flute, tenor and trumpet floating above highly rhythmic, fast-paced orchestral variations on the music that is their antecedent; congealed in multiple choruses, sometimes slightly on edge, but nonetheless grandly, eloquently declarative and conclusive. And it's all wrapped in that swinging jazz hotbed called Chicago.