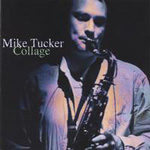 Tenor saxophonist/composer Mike Tucker catches attention on his debut, Collage. The Boston-based musician, age 26, established some good credentials through his participation in the 2002 Thelonious Monk International Jazz Saxophone Competetion and then in 2005 Nancy Jazz Festival in Lorraine, France in the company of first order jazzmen like Joe Lovano, Pat Martino, Michael Brecker and Gary Burton.

Tucker & Company come charging out of the gate circa 1964, sounding like Joe Henderson and Kenny Dorham on an attractive bebop original, "Fanfare." But wait... there's no trumpet listed in the liners. A little research shows that Eric Bloom, who contributes a buoyant solo, only appears on this track. Tucker follows with a probing solo that never loses touch with melody and provides a promising start. The ten compositions are all originals, with the exception of Bill Drew's "Bird Lives," the one ballad.

Tucker knows how to write on these tunes and certainly is fluent enough to make you feel that he has much experience in the genre. He reports that he enjoys playing funk as well as mainstream jazz, and it is evident that he uses the opportunity here on several occasions to explore that, as well as fusion-ish work (notably on the eleven-minute "Space Suite"). Even on these settings, his playing is filled with fresh ideas and unflagging energy. There seems to be something worthy upon close listening on virtually all of his solos.

Leo Genevese, who turns in a fine series of piano appearances, is respectively sensitive and swinging. He also spends much of his time on the electronic keyboards, using Fender Rhodes and synthesizer far too often to suit me. It seems only natural on a tune called "70's," but his concentration on the Rhodes/synth on the latter half of the album is distracting. On a composition close to the end, Genovese switches to acoustic piano after his electric solo and the improved sound leaps out to the listener.