By VICTOR VERNEY
August 2, 2013
Sign in to view read count 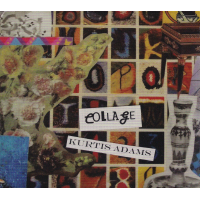 Saxophonist Kurtis Adams could scarcely have chosen a more apt title for this release, an eclectic-minded assemblage drawn from a wide variety of musical genres, including classical.

The opening "Blue Fox," has a distinctly West Coast "Cool School" feel, a style to which Adams has rendered homage elsewhere. Here, Adams gives a sense of what Gerry Mulligan might have sounded like had he played tenor.

The following "The Ocean" immediately makes a dramatic shift to Chopin, indicative of Adams' academic background (he is currently Director of Jazz Studies at Shepherd University). Marked by the back- and-forth shift between major and minor tonalities characteristic of Eastern European music, it features pianist Nathan Lincoln-Decusatis blending jazz and classical voicings nicely in his extended solo.

Adams gives all three sidemen equal time as soloists. Bassist Blake Meister's excursion on "The Invincible Man" is notable for combining a nimble-fingered attack with a full, rounded tone, while Adams' plaintive commentary implies an ironic statement about human self- delusion—no man is invincible, of course, a fact of life often forgotten by many.

"Arrhythmia" is post-bop with a tinge of the avant-garde, while "3 Degrees" moves into the realm of Bartók and Cage. In "3 Degrees," an adagio series of three-note piano figures underpins a discordia concors exploration by the saxophone and bass. Eventually, the minimalist harmonics fill out, and contradictions are teased into final resolution.

All but two cuts are Adams compositions, showing the strength of his writing chops (which in 2005 garnered him the Best Original Composition award from Downbeat Magazine for his tune, "Instable Mate?"). Lincoln-Decusatis contributes "Peacocking," a strut that is definitely a pianist's tune, complete with thematic parallel sixths and occasional minor seconds marking it as a nod to Monk.

Throughout, Lincoln-Decusatis' piano offers hints and suggestions— Tommy Flanagan, Horace Silver, Keith Jarrett, Bill Evans, McCoy Tyner- -pointing to a musician who has absorbed the stylistic vocabularies of the greats and distilled them into his own personal approach, both muscular and lyrical.

The collection closes with a ballad, without which no jazz CD is complete. Its title, "Bye Starlight," a clever bit of wordplay, alludes to Victor Young's classic tune about Stella. It also refers to one of music's most time-honored subjects—one that presents the challenge of evoking the celestial without being saccharine about it. Adams and his cohorts, including Meister soloing con arco, meet that challenge admirably.

All told, Collage is an interestingly disparate assortment that well rewards listening and is highly recommended.