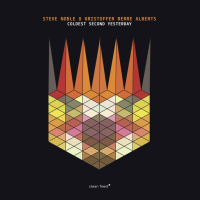 Saxophone/drum duets tend to bring out the devil in people. Norwegian reedman Kristoffer Berre Alberts' approach might come as a surprise for those familiar with him only through his work with bands such as Snik and Cortex. Here he explores the edges to the exclusion of almost all else, with barely a conventional pitch among the false fingering and overblowing. But his companion Steve Noble is one of the most rhythmic of European free drummers and his presence ensures that the extremes are anchored in biddable time—not metronomic, but with a variable pulse which absorbs the body as well as the mind.

Crisp and precise, but also informed by his time with post punk band Rip Rig & Panic, Noble demonstrates the qualities which have made him an integral part of several Peter Brötzmann combos. But it's not all about zealous propulsion as he also shows a fine touch in his tone color play, with untethered cymbals on the drum heads an especially fertile gambit. Alberts makes a definitive statement of intent, and while his work may not be groundbreaking he certainly makes an impact, particularly when he worries away at phrases to create an hypnotic effect.

On three spontaneous interactions excerpted from a live concert in Olso's Kulturehuset, the interplay impresses as responsive, engaged and focused. Both men burn virtually continuously, meaning it's a potent set. Perhaps that explains the 34-minute playing time—you don't need or necessarily want more after such a powerfully distilled outing. It's high energy right from the piercing saxophone whistle and drum explosion that launches "Animal Settlement."

A change of pace but not intensity materializes in the second half of "Order Left Behind" as Alberts indulges in peaks and troughs of quiet skronk. Whenever the pair lock into repeated figures and matching drum patterns, it never ceases to excite. By the end, Alberts more than holds his own, and if there has been some devilry, then it has also been accompanied by some sure signs of tangible communication.