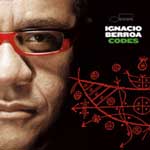 For some insight into the codes to which the title of drummer Ignacio Berroa's debut album refers, compare his version of the António Carlos Jobim classic "Inútil Paisagem with the excellent piano trio version by Aaron Goldberg on Worlds (Sunnyside, 2006). Goldberg takes it very slow and successfully taps into the number's rarefied, slightly decadent Brazilian chic. Berroa, in contrast, recasts the tune as a lovely, more buoyant and maudlin bolero.

There is a slight, not heavy-handed concept to Codes, namely that "Latin jazz is an amalgam which is better appreciated by periodically returning to each of the ostensibly pure forms from which it is composed. Thus, Latin numbers are "recoded" as more or less straight post-bop jazz (in the case of the bona fide bolero "Realidad y Fantasia, a showcase for Felipe LaMoglia's tenor sax), and jazz pieces (like "Woody 'n' You ) are played as Latin numbers.

Another dimension of the concept is that Brazilian music is part of Latin jazz, too; although, as with the transposition of "Inútil Paisagem, Berroa revels in the differences among Latin musics. Berroa is not an attention-grabbing frontman, as befits a player who waited 26 years to cut his first album as a leader. Nevertheless there are rewarding drum passages, including his muscular solo ending with Afro-Cuban fluorishes on "Woody 'n' You.

Pianist Gonzalo Rubalcaba is a marvel throughout. His playing seems to seek, by sheer dint of disciplined effort, a crystalline precision not normally allowed by the engineering of the instrument (this tendency is also in evidence on his recent Solo album).

Sometimes the re-coding from jazz to Afro-Cuban forms and back occurs in the middle of a piece to highlight the contrasts. This process may sound drily intellectual, but it's not: when Berroa shifts to an Afro-Cuban rhythm almost four minutes into "Matrix, right underneath Rubalcaba's piano solo, you are likely to emit an involuntary "Ah!