By PHIL DIPIETRO
December 25, 2006
Sign in to view read count 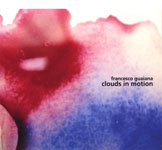 There's not much information out there about one of 2002's finest recordings, NoJaz, by a talented young group led by our man-of-the-moment, guitarist Francesco Guaiana, hailing from Palermo, Sicily. A diamond in the vast mine of indie jazz, its virtuosically painted inside/outside-isms are tethered to an ECM folk aesthetic. Four years later, we have a solo guitar recording from Guaiana, now 33, who proves a talent to be reckoned with in this idiom as well.

Guaiana touches on a litany of stated influences, including Jim Hall, Michael Hedges, Arvo Part, Egberto Gismonti and Nels Cline, while managing to sound just like himself throughout. His concept actually "focused on the sound of clouds in motion and the incredible difference between their slow movement and the chaos of contemporary city life. It's the second 2006 recording to take inspiration from airplane travel, attempting to "transpose that feeling in music, the sense of 'lightness' felt when flying.

Guaiana is expert at the use of loops and effects in real time, using no overdubbing on the recording save for a gentle reverse electric lead, which sometimes takes the sound of a bandoneon, over nylon-string classical guitar on the plush "Quadretto. On "Bridge he loops a quadrant of double stops to support slashes of graceful steel-string chords, as the guitarist toys with his own methodology of touch and release on the fretboard. Stripping the harmony bare to a simple single-note theme opens the canvas up for thickening via processing, vortexing us into the melody and the guitar's sound hole, only to gently release us, accompanied it seems, by the sound of our pulse, which has been covertly woven into the melody by our auteur.

"Pensieri Densi entails our proponent pounding his instrument into submission to rid himself of "Dense Thought using repeated single notes to add shards of propulsion in a language having little to do with jazz. From this more rock-influenced landscape, Guaiana can conjure at will pristine fingerpicking technique and advanced, dissonant voicings drenched in jazz theory, as on "Segnali di Fumo.

"Fabbrica shows us Guaiana's avant-gardist "factory exploring the textural possibilities of steel strings stopped with pins, paper and metal, splayed open through an industrial process of his own device. His three-part ode to Derek Bailey sounds conventional by comparison, beginning with a rich, bop-box sounding chord solo that could belong to Joe Pass, save for its live-loop repeating phraseology, with two more installments extending the concept into triad and diad spiced linearity. All the while, Guaiana demonstrates his hyper-awareness to the detailed phraseology inherent in his spinning of the line.

"Riff encapsulates Guaiana's solo oeuvre, featuring a beguiling bass sequence, looped to cushion a clean solo, improvised yet constructed, each note dedicated its exact, correct amount of decay before the next, all lined up to create ninety seconds of memorable motif.

In Clouds in Motion, Francesco Guaiana has again issued a recording reeking of the exuberance of creation—and he's captured the sound of clouds in motion. That should be enough.