By STEPHEN LATESSA
August 27, 2005
Sign in to view read count 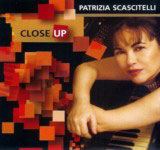 Close Up, the latest disc from Italian pianist and composer Patrizia Scascitelli, features eleven strong tunes from her pen that reveal the mellow strengths of her band as they move from reflective ballads to strutting blues. Echoes of the past are never far from the surface, revealing an affectionate knowledge of jazz history.

Artie's Place was written as an offshoot of jam sessions held in Artie Simmons' Harlem apartment. First Mark Gross gets the chance to lay down an utterly charming clarinet solo that gets progressively more exciting before yielding to Jim Seeley's trumpet, which sounds at is it might have been unearthed from some delightful time capsule. The whole performance is a real treasure, showcasing musicians who have deep respect for the tradition from which the song was sprung.

Scascitelli herself plays a wonderfully devil-may-care intro to the evocatively titled "Scott Joplin's Caribbean Walk. The rest of the band joins in for a sweetly pulsing calypso that radiates joy. Scascitelli's solo is melodic and crystalline, rolling with the energy of a stroll on the beach. Elsewhere, "Samantha's Blues bounces along with abandon, the horns wailing in tandem.

The playing on Close Up is more than impressive, but in some ways the widespread and fully realized compositions are cause for the most attention. Scascitelli's eleven tunes skirt cliché and offer the band fresh settings to explore. In a time when original compositions can often seem rote and overly familiar, an album with such an abundance of intriguing material is more than welcome.