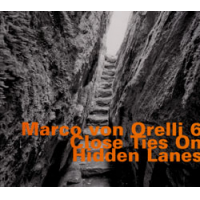 Indeed, an impressive inaugural release by Swiss trumpeter Marco von Orelli, who conveys maturity way beyond his youthful age. On call for writing jingles, session gigs, and theatrical productions, the conservatory-trained artist may have a bright future ahead of him, based on the qualitative aspects of this sextet date.

"Urban Ways" is a prime example of von Orelli's cunning musicality, when considering the scope of these multifaceted works. With a pumping funk-groove and contrasting unison horns, the band summons a cheery vibe. Framed on a simple melody line and an upbeat modality, the sextet swerves into a free-form avant-garde sequence, tinted with bizarre electronics swashes and shift gears, encompassing notions of anguish and uncertainty. This pattern continues, as von Orelli injects pathos with his muted wah-wah phrasings and a few slippery detours along the way. The group doesn't pronounce any semblances of complacency, as pianist Michel Wintsch shifts the piece to another zone with his lower-register ostinato phrasings. But von Orelli tosses another curve into the grand schema by faintly altering the primary melody during the coda.

Von Orelli is a perceptive young man, signaling a variegated approach to the progressive jazz idiom. And while citing someone as a star in jazz circles may be hindered by a few boundaries since most notions of convention go by the wayside, von Orelli does project star potential on the basis of this striking debut.