By BRUCE LINDSAY
November 20, 2013
Sign in to view read count 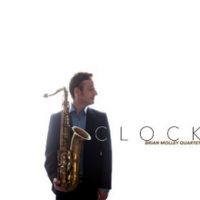 Clock suggests consistency, the regular tick and tock of seconds, minutes and hours moving inexorably onward. Reliable, necessary, but a bit lacking in variation—and as for swing, that would never do, not in a clock. So the title of this Scottish quartet's debut album is somewhat misleading, because the Brian Molley Quartet swings mightily.

Molley, saxophonist and composer, is joined by a rhythm section of impeccable style: bassist Mario Caribe, pianist Tom Gibbs and drummer Stuart Brown. Molley, Gibbs and Brown work together in the Stu Brown Sextet, a band probably best-known for its interpretations of the tunes of Raymond Scott. Brazilian-born Caribé has become a key member of the Scottish jazz community, working alongside a diverse range of international stars including Joe Lovano, Ken Peplowski and Maria Schneider.

Whether it's the up-tempo "Parapraxis," the romantic and slightly mysterious "Iris And Her Bow," the good-humored and groovy "Chance On Chan" or the lush, sophisticated "Destinesia (of Fred and George)" the quartet always displays a cool, seemingly effortless, swing. Molley's tenor tone is gorgeous—warm, full and emotive. He combines that lovely tone with an acute ability to judge just how far to take his playing. Rather like the superb Bobby Wellins (a fellow Scot and tenor player) Molley never wastes a note.

"Cara y Cruz" kicks off proceedings, asserting the band's Latin chops, establishing Molley's talent on tenor and giving Gibbs an early opportunity to deliver a sparkling solo. Molley favors tenor saxophone on most of the tunes, but it's not his only instrument. On the punchy "When I Talk About Swimming" he adds bass clarinet to the tenor, the second instrument's rich and woody sound complementing Caribé's double bass. For "Chance On Chan" Molley's instrument of choice is the soprano saxophone, the higher range and tighter sound helping to create the tune's light-hearted flavor. On the sprightly "Um, Dos, Três" it's the clarinet.

Contemporary jazz with a Latin influence. That's what it says on the press release and on one level it's a pretty accurate description. But it doesn't tell the whole story—Clock is a great way to spend some time.

Cara y Cruz; Get Happy; Destinesia; Destinesia (of Fred and George); Iris And Her Bow; Chance On Chan; What'll I Do; When I Talk About Swimming; Parapraxis; Um, Dos, Três.