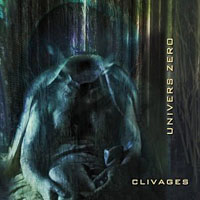 It's no small achievement for a band to be around for over thirty years and still sound distinctive, but the Belgian Univerz Zero manages the feat with no sign of strain. Over that time, the group has cleaved pretty closely to its original template, which can only be described as chamber music for a dark, forbidding world, the likes of which makes even this second decade of the twenty-first century seem welcoming by comparison.

There are, however, developments afoot. On some of the music here, not least drummer Daniel Denis' "Les Kobolds," there's a trace of Flemish folk music that previously had no place in the group's sound world. Whether or not that amounts to a compromise—and on aural evidence alone it can be seen as such because it amounts to a ray of light in an otherwise dark, dank and unwelcoming world—is, however, a moot point.

At three minutes and eleven seconds Denis' "Earth Scream" makes up for its brevity with extraordinary atmosphere. A cross between musique concrète and the sound of previously unimagined machinery in action, the piece is as unsettling as anything the group has made on more conventional instrumentation, although a word like conventional doesn't carry much weight in this context.

The light, relatively speaking, is to the fore on "Soubresauts," albeit in a setting tempered by that sense of foreboding the group has made its own. Bassist Dimitri Evers' contribution is a model of discontinuity, for all of his abilities at imparting some momentum. Denis' cyclical patterns have the effect of teasing out the minimalistic aspects of the music, but the martial feel that the whole group exudes—again one of those aspects of Univers Zero's work that runs like a thread through its lengthy history—is right in keeping with the singularity of sound they're rightly noted for.

In the same regard, formalism equally applies. It comes over in Kurt Bude's "Three Days," which is as alive with atmosphere as anything here. The composer and bassoonist Michel Berkmans bring the music closer to the western classical tradition than anything else but, again, there's little joy to be heard, apart from the composer's clarinet, when it departs on a peripatetic dance at around the two minute fifty mark.

Overall, Univers Zero's recent developments have resulted in a cumulative effect of opening the music in a way that couldn't possibly have been heard from the band in earlier times. Such is the group's singularity, however, that describing Univers Zero as always different, always the same, just about encapsulates its abiding appeal.