No matter how much you know, or think you know, about the life and artistry of Tony Bennett, you will learn something new from Clint Eastwood's lovingly rendered, impeccably produced two-DVD documentary 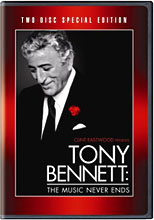 No matter how much you know, or think you know, about the life and artistry of Tony Bennett, you will learn something new from Clint Eastwood's lovingly rendered, impeccably produced two-DVD documentary Tony Bennett—The Music Never Ends. Eastwood and director Bruce Ricker weave together performance clips, photographs and memories to trace the course of how Anthony Domenick Bennedetto's dream of singing came true.

Anthony Hopkins' simple but no less eloquent introduction says it best: "If America is a song, Tony Bennett is its singer. Here is the singer. And here is the song."

The biographical correlative to Tony Bennett's song began in the US depression in the 1930s. Bennett never really knew his father, who died when he was ten, and as a result grew very close to his mother, a seamstress who raised three children by earning one penny per dress in a sweatshop. Bennett's mom and her hard work deeply influenced his professional motivation and outlook. "That was the reason I went into show business, to get her away from that sewing machine," he asserts, and later confides to Eastwood, "My instincts as a performer—I just wanted to forget for ninety minutes that there's trouble anywhere."

Chapters providing an overview of Bennett's early career with Columbia Records acquire salt and light from conversations with producer Mitch Miller (Director, Columbia Records A&R, 1950-1960), whose long and loud battles with his singer over songs became legend. Bennett recalls the tempest when Miller presented him with Hank Williams' "Cold, Cold Heart": "I had a scene with Mitch Miller on that one. I told Mitch, 'It's a wonderful song but I wouldn't know how to sing it. I'm from New York City and I wouldn't know how to sing a country song.' He said, 'If we have to tie you to a tree, you're gonna do it, whether you like it or not.'"

Miller concedes that "it wasn't easy at first because [Bennett] had lots of doubts about every piece I ever gave him—which was good because we'd argue it out. Those arguments with Tony were very good and if you stop and think, they resulted in a variety of records, all of which became hits."

The Music Never Ends spotlights two more important collaborators, both pianists. "Ralph Sharon out of all of them never really played a wrong note for me," Bennett insists. "He just understood the way I phrased, it was just right." The DVD chapter "An Incredible Partnership" overviews the recording partnership between Tony Bennett and Bill Evans: clips of the duo performing "When in Rome" on The Tonight Show with Johnny Carson; Bennett describing Evans' piano style ("He played like the ocean in a storm"); and the singer confiding to Eastwood that the idea behind the Evans/Bennett collaboration came from Annie Ross (of Lambert, Hendricks and Ross fame).

Because Bennett's reputation not only as a musician but as an artist grew commensurately with his catalog, The Music Never Ends also features tributes from other admirers, such as Harry Belafonte (who marched with Bennett alongside Martin Luther King, Jr. from Selma to Montgomery), Mel Brooks, pianist Bill Charlap and painter Everett Raymond Kintsler. Director Martin Scorcese, who elected to underscore the opening credits of his Goodfellas with Bennett's version of "Rags to Riches," explains, "In terms of these songs, 'Boulevard of Broken Dreams' or 'Rags to Riches' or any of the stuff he was doing at that time, they are like little dramas."

Scorcese later concludes, "He's got his own signature, really, that comes from the world of jazz and the world of swing. But he's not belonging to either one."

"How Do You Keep the Music Playing?"

"The Great American Songbook" chapter reinforces the critical and popular idea that Bennett's longevity comes from one unsophisticated yet profound concept—he only sings great songs. "The Great American Songbook—" Bennett continues as the camera rolls through black and white stills of Cole Porter, George Gershwin, Duke Ellington, Irving Berlin, Oscar Hammerstein, Richard Rodgers and other songwriters of the golden age—"I don't know of any popular songs that sound better than the music that came out of America, the United States. It goes past demographics!"

Concert and television clips buttress the argument that Tony Bennett is America's pop singer. He digs deep into "Old Devil Moon" with the Count Basie Orchestra (BBC TV, 1969), a much less jumpy, more groovin' take than recent versions; bounces through a jazzy "Just in Time" on The Steve Allen Show; and melts "Blue Velvet" like audio butter for Playboy After Dark (1969). Excerpts from his 2005 Monterey performances include "I Got Rhythm," "They Can't Take That Away From Me" and "The Best is Yet to Come."

Other noteworthy clips include Bennett's mom reciting an obviously scripted interview response, appearing frightened as a rabbit; and Bing Crosby singing Cole Porter's "Now You Has Jazz" arm-in-arm with Louis Armstrong in the movie High Society (1956), a number they absolutely kill.

His breakout, "I Left My Heart in San Francisco," is reflected through several prisms. After the singer admits that he thought the flip side ("Once Upon a Time") would be the hit, he is shown performing it at Monterey, on The Ed Sullivan Show and in duet with the star of The Doris Day Show. It is also shown as a poignant duet between Bennett and the star of The Judy Garland Show, the pair seeming to crackle musical electricity; by its end, the oft-troubled Garland seems to cling to his arm like a lifeline, then bubbles over with out-loud laughter at the sheer joy of their joint performance of the song. "I Left My Heart in San Francisco" landed Bennett a 1962 headlining gig at Carnegie Hall which, to this day, he calls "the best moment of my whole career."

Tony Bennett—The Music Never Ends returns executive producer Eastwood and director Ricker to the heights of their previous collaboration on Thelonious Monk: Straight, No Chaser (2001, Warner Home Video), one of the most thorough, respectful and justifiably famous documentaries to ever honor a jazz musician.