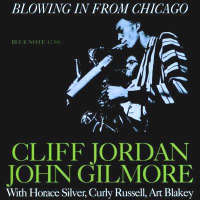 Imagine if Art Blakey, at the height of their popularity in 1957, invited a couple of sax guys you've never heard of to play with them.

The result would be Blowing in From Chicago—a lively, wonderful record firmly in the Blue Note bop tradition.

The rhythm section is extremely familiar: Art Blakey on drums, Horace Silver on piano and Curly Russell on bass. It's the same rhythm section that powered the Jazz Messengers in their great set, A Night at Birdland, just three years earlier.

And on sax, we have the co-leaders Clifford Jordan and John Gilmore, a pair of little-known tenors who are, despite their lack of renown, genuinely first-rate. If you've never heard of them, or this record, you're missing something.

As the title implies, the sax men are from the Windy City. The liner notes say Jordan and Gilmore bring some kind of unusual musical spirit from their hometown. Well, hardly. If there's a difference between their playing and that of better-known New York boppers of the same era—say, Lou Donaldson or Hank Mobley—I don't hear it. And that's a good thing.

The record kicks off with a fun, fast bop number called "Status Quo," with toe-tapping solos from the two Chicagoans, and short choruses from Silver and Blakey. "Bo-Till," an original by Jordan, starts with a Latin-ish theme, then quickly switches to straight bop. More lively fun.

The mood shifts a bit for straight, noir-ish blues on Gigi Gryce's "Blue Lights," then the Charlie Parker bebop classic "Billie's Bounce." The latter starts with a kick in the head from Blakey's powerful drums, then nine minutes of superlative solos from Jordan, Gilmore and Silver. It's the highlight of the album.

Three more straight bop numbers finish the record, including one more tune by Jordan, one by Silver, and a previously unreleased number of unknown provenance. It's a strong outing that makes me wish Jordan and Gilmore had played a lot more together.

After Blowing In, Jordan recorded a bunch of well-reviewed records through the 1980s, but he never became a household name. For Gilmore, this was his one and only gig in the leader's chair. He spent the rest of his career playing in Sun Ra's Arkestra—again, a relative unknown.

But for this one moment, Jordan and Gilmore are every bit the equal of any past or future Jazz Messengers. It's an enjoyable record, well worth picking up.