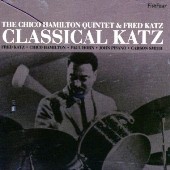 The lasting impression of this music by drummer Chico Hamilton and composer/cellist Fred Katz is that of a quiet revolution overtaken by events captured in time to such an extent that it encapsulates that moment or at least a particular strand of musical development that has since petered out to nothing in the half century that's passed since the music was recorded.

For this is a highly formal variety of jazz, so much so in fact, that there are times when the music hardly qualifies the description and the significance of this cannot be overstated. This is also music as far outside the mainstream as it has ever been and that in itself is significant. To hear "Allegro" from cellist Katz's "Suite For Horn" is to hear formal music deeply imbued with jazz's informal aesthetics, and whilst the results might not be to everyone's taste they undoubtedly have an exploratory edge, impatience with the established practices of the day.

A preoccupation with color, light and shade is evident on "Granada" where Katz's solo cello evokes a Spanish tinge quite at odds with that of Jelly Roll Morton. It's a tribute to Katz's breadth as a musician that he's able to put out the blues with some conviction on the following track "Katz Up."

"Montuna" sounds like fledgling free improvisation for its first minute before the quintet segues seamlessly into composition. Whilst this might seem like no big deal from a 21st century perspective, for its time this was nothing less than revolutionary, so again the ideas discussed in the opening paragraph of this review are pertinent.

The program is effectively split into two halves and the second half captures the group in a live setting. The music is thus slightly more informal and Paul Horn's tenor sax, an amalgam of a little Lester Young and a lot of Stan Getz, burns with the bluest of flames on "Chanel No.5."

Kurt Weill and Maxwell Anderson's "September Song" is subjected to a reading which coaxes out every nuance of its exquisite melancholy and on "Mr. Jo Jones" drummer Hamilton gets to evoke the spirit of one of the greats even in the midst of one of Horn's often prissy sounding outings on flute.

Overall this music is as much an acquired taste now as it was when it was first produced and as such, it still evokes the spirit of what jazz can be, far more than what the average listener might consider it to be. As such, its significance is as much historical as anything else.

Visit Chico Hamilton and Fred Katz at All About Jazz.