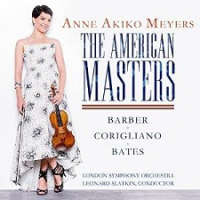 Violinist Anne Akiko Meyers follows up her superb Vivaldi, The Four Seasons (eOne, 2014) and provides a partner to her The American Album (RCA Victor, 1996) that featured the music of Copland, Ives, Baker and Piston. On the present recording, Meyers opts for a more contemporary fare composed by Barber, Corigliano and Bates, three composers whose careers overlap mightily.

After the primly cool Vivaldi of her last recording, Meyers infuses an organic warmth into the American Romance of Samuel Barber's Concerto for Violin & Orchestra. The allegro is full bodied and Meyers is freely expressive. Her tone in the andante is well balanced and just short of creamy sensual, evoking spring, new and refreshing. In the demanding presto, she shines with precise articulation and reflection.

John Corigliano's Lullaby for Natalie was written for the birth of Meyers' daughter and is premiered here. It is a delicate melody whose harmonic structure is plush with spiritual cushion. It is a brief and supple piece, well composed and played. Also premiered is Mason Bates' Violin Concerto. Bates, a protégé of Corigliano, picks up where Barber left off in his concerto, investigating more dissonant and anxious terrain.

Leonard Slatkin possesses an empathic spirit with Meyers, ensuring her support is crisp and sharp. The LSO is in top form. 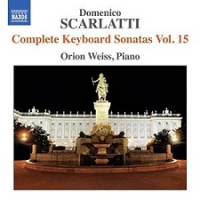 Naxos' ongoing Scarlatti Sonata series makes it to volume 15 with pianist Orion Weiss at the helm. Weiss is on the front end of his career, having already recorded some well-received Debussy and Schumann. His Scarlatti is fresh and playful.

The importance of this series lies in the fact that it is more affordable than competing versions and that it is all played on piano as opposed to harpsichord. Vladimir Horowitz created a revolution in Scarlatti similar to that of Glenn Gould in Bach. After Horowitz, Scarlatti became required music in any pianist's repertoire who was worth their salt.

The year 1685 saw the birth of the greatest musical trio in history. J.S. Bach, G.F. Handel and Domenico Scarlatti made their entrance into the world and proceeded to change everything about music. It is unknown if all three composers were ever together, though Handel and Scarlatti did have a head-to-head at the harpsichord and organ, splitting the difference.

Scarlatti's 555 keyboard sonatas are relatively short studies for harpsichord composed as performance exercises. Because of their brevity, these sonatas could be seen as Baroque ragtime pieces, carefully conceived and precisely composed. There are few concert pianists playing today that do not have a Scarlatti in their performance repertoire.

Scarlatti for piano was pioneered by Vladimir Horowitz in the 1960s while recording for Columbia (to become Sony). Horowitz played his Scarlatti with a romantic flair, making these Baroque pieces uniquely his. In the present collection, Weiss opts for a more traditional approach that includes a more conservative use of pedals as well as the crisper articulation of the period.

Weiss tears off a brisk and rollicking performance of the G Major Sonata, K455 that when compared to Horowitz, readily exposes the latter's Romantic performance tendencies. Weiss' approach to the minor key sonatas,—D minor, K552 and A minor, K265—further demonstrate his more conservative approach. Naxos continues this significant series with a very fine account by an equally fine pianist.