By JIM SANTELLA
November 1, 1998
Sign in to view read count 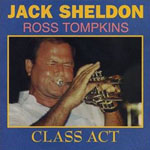 Trumpeter Jack Sheldon, who turns 67 this month, started out with Wardell Gray, Dexter Gordon, Curtis Counce, Bill Holman, and Stan Kenton. He moved on quickly to an eclectic career that has included hard bop ensembles, his own big band, studio work, singing & acting, but never strayed far from the sweet tone and fluid articulation that pours forth from his trumpet.

Back in the '60s Sheldon starred in the television spy-spoof sitcom "Run, Buddy, Run," and he was Merv Griffin's music director during The Merv Griffin Show's" run in the '70s and '80s. Nick Ceroli, Ray Brown, and Plas Johnson worked with him on that one. A witty comic, the trumpeter fills a part of his live performances with funny asides that leave you rolling in the aisles. Sheldon's vocals on "Conjunction Junction" and "I'm Just a Bill" from ABC's "Schoolhouse Rock" series (one vocal reprised on Fox's The Simpsons) have caused his voice to become quite familiar to a larger audience.

Class Act is a romantic album on which Sheldon alternates his clear ballad trumpet tone and his fuzzier "cool school" timbre for effect. Similarly, he sings in a raspy tenor voice at times and opts for the deeper baritone swells for romance. Sheldon announces a dedication at the start of "Till the Clouds Roll By" to Helen "Gorgeous" Borgers, KLON-FM radio announcer; they're located at http://klon.org/ and can be heard via the 'net playing Sheldon's music day and night. More information on the trumpeter's recent recorded works may be found at http://www.butterflyrecords.com/ .

Sentimental ballads such as "It's the Talk of the Town" show the listener just how much the emotional meaning of a lyric applies to Sheldon's performance. His fluid bop trumpet lines and 1/2-valve expressions clearly convey the unique message the artist feels. Whether singing in a half-speaking manner or "going off" in a rapid-fire flurry of 16th-notes, Sheldon performs the songs with his own personal zeal and mannerisms. "Indiana" finds the singer stretching his voice as he's done on the Schoolhouse Rock episodes. It's always enjoyable to catch a familiar phrase like that, and here it's amplified by the trumpet and piano interludes. "My Romance" is a lush ballad that the duo presents with respect and utmost dignity. George Gershwin's "Soon" is performed as a standard tribute to its composer and offers a fine example of the similarity of energy displayed by both trumpeter and pianist through the dexterity of their fingertips.

Jack Sheldon composed "Swimming in the Riviera" and starts the piece with a lyrical trumpet presentation that floats along on gentle waves. His tone changes to a raspier Schoolhouse Rock kind of timbre as he introduces the lyrics and the unexpected meaning of the song. Just like many a blues lyric, this one is based on heartbreak and how we learn to cope. Sheldon sings, "I'll find some understanding—you're gonna be sorry for all the mistakes you made." But the Riviera he's swimming in is not what you'd expect. The singer is cruising down Avalon Boulevard with his "rear end raised way up high" and his taillights on. Highly recommended.

The Song Is You; Till the Clouds Roll By; It's the Talk of the Town; I'll Walk Alone; (Back Home Again In) Indiana; When Your Lover Has Gone; I Cover the Waterfront; Is You Is, or Is You Ain't (Ma' Baby); Swimming in the Riviera; Soon; A Time for Love; Moonsong (That Wasn't Meant for Me); My Romance; Ev'ry Time We Say Goodbye.