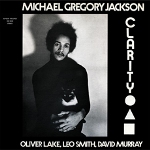 Michael Gregory is the quintessential modern troubadour. He may not sing in a Romance language, but he turns his instruments of choice—guitar and voice—into a powerful language that enables him to recreate the sensuous, reverential and spiritual literature that, in turn, enormously enhances his songbook. Gregory turns on the charm on Clarity, a short, but memorable album that provides a telling snapshot of the musician's art. He is joined here by the power trio of alto saxophonist Oliver Lake, tenor saxophonist David Murray and trumpeter Wadada Leo Smith—who, at times, eclipse Gregory's enormous presence. This is gracious on the part of the guitarist, who often moves the music to his whims and fancies.

Clarity possesses some of the most exquisite music that Gregory has ever written and performed. The extended version of "Prelueoionti" sees the guitarist leaping off into the unknown with great, galloping lines that move breathtakingly forward, gaining mass and momentum as the song progresses. Shaped like a mini concerto, "Prelueoionti" is a masterpiece of changing tones and colors that Gregory delivers magnificently on his sonorous acoustic guitar. The extended version of the title track, "Clarity (4)," is a moving exploration into the world of the guitar, but this time Gregory is also joined by the saxophonists and Smith. The result is a moving, probing exposition of a song that suggests vast possibilities—many more than it actually brings forth—as much of the improvisation takes off with lines that vanish into infinity before they are brought to fruition.

Gregory's vocals are uniquely soft. His burnished voice glazes the lines as he annunciates with sharp clarity, only to soften the lines as they fade away at the end of each bar. This style of vocalizing makes his voice singular, and enhances his image like that of a black troubadour, wending his way through life as he picks up the shards of broken glass that appear in his path. Thus his ability to soften the music as he bends notes and twists phrases is often at beautiful odds with the harsh nature of his musical journey. There may be many more albums that showcase Gregory's music with greater finesse, but the elemental beauty of these songs that he shares with Lake, Murray and Smith, is timeless.