By DAN MCCLENAGHAN
December 16, 2008
Sign in to view read count 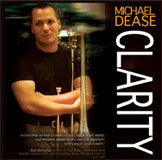 The eminent J.J. Johnson casts a big jazz shadow, as the trombone master was instrumental in bringing the big brass horn out of the harmonic background and into the ensemble forefront, beginning with his late 1940's work with Charlie Parker. Without him, we might never have seen the star of Curtis Fuller rise on the classic John Coltrane set, Blue Train (Blue Note, 1959).

And without those two pioneers, Michael Dease—who was surely destined for music—might be doing his thing on tenor saxophone.

Dease, a graduate of The Julliard School, cites both Fuller and Johnson as influences. His sound is big and warm, articulate and full of zest. On Clarity, he's put together a set of cool, swinging mainstream jazz. Dease's chops are impeccable, and he proves himself a fine composer and arranger on nine original compositions, rounded out by Kurt Weill's "Speak Low."

Dease's tone can be quite bold, even brash, as on "One 4 Steve," a nod to fellow 'bone man, Steve Turre. It can also be warm, mellifluous and soothing, as it is on the aptly titled "Lullaby for Rita." And he can bounce along with a springy stride, as he does on "You Dig?" Dease is an artist obviously in full control of his instrument.

Dease proves himself a talented young artist with Clarity; a trombone master with a bright future.