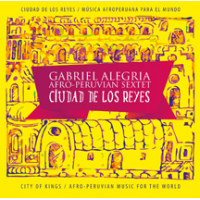 Trumpeter Gabriel Alegria has all but issued a mission statement to establish and cultivate a Peruvian/jazz style. Unlike most styles of Latin music, like montuno-based Afro-Cuban and bossa nova, Peruvian music does not stem from the clave rhythm, but instead from 12/8 (or 6/8, depending on who is your resident self-proclaimed expert). In short, it's a three-against-four deal. The opening section of Chick Corea's "Litha" provides an easy American reference.

Alegria's group has the typical trumpet/saxophone frontline, along with guitar, bass, drums, and auxiliary percussion. There is a crisp lightness to the band which is surprising, given the internal reliance on percussion. Cuidad De Los Reyes' tunes—six by Alegria, six by saxophonist Henry Mancini—are of the post-Wayne Shorter persuasion, which means that there is both openness and harmonic specificity to the writing. Alegria definitely likes texture in his group, but his restraint keeps things from turning noisy. When the guitar goes fuzz-toned, it doesn't reek of "here's the electric moment." For the record, Yuri Juarez is doing some heavy lifting throughout the disc on both electric and nylon string guitar.

The bulk of the soloing is by Alegria and Leguia, and each is up to the job. Alegria has a gorgeous, clear sound, and his rhythms are both driving and unobvious, not unlike Lee Morgan. He's also got a decent arsenal of old-style effects, including a plunger mute growl that would have impressed Cootie Williams. Leguia is heard on both on soprano and tenor saxophones, both to advantage. Her tone on each is soft but not limp, and her lines hold together admirably. Her lines are directed by never obvious. She is a soloist whose attraction is in hearing where she'll end up.

The rhythm section has a particularly important job here, largely to make the three-against-fourness of this music swing as evidently as American 4/4, and it members succeed, mostly by not trying to out-bang one another or by subdividing rhythms to the point where the time is obscure. It's very light, tight, and discreet, but not without fire. The trap drum duties mostly fall to North Carolina-born rising star Shirazette Tinnin. Hugo Alcazar, who plays cajon on most of the record, is on drums for two cuts and acquits himself very well. Mostly, however, he shares (non-drum) percussion duties with Huevito Lobaton, and they lock in very well throughout without overpowering the often-delicate compositions.

The only thing Ciudad De Los Reyes gets wrong is the version of "Moon River." Throwing in a few new chords robs it of some of its impact. Frankly, it's Mancini's greatest syntactical moment as a songwriter; in other words, his formidable ability to perfectly marry a melody to a chord progression, which reached its apogee here. It didn't need a reharmonization.

This complaint aside, Ciudad De Los Reyes delivers. It's that rare thing: a new, real jazz record that swings in an honestly original way.