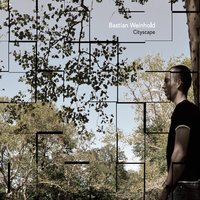 German-born drummer Bastian Weinhold came to New York City in 2009 to study at the Manhattan School Of Music. He quickly got a lot of traction around town, recording and subsequently releasing his debut album, River Styx (Frame Music, 2010) just over a year after his arrival. His backing band on that release included Linda May Han Oh, guitarist (and Bastian's brother) Nils Weinhold, pianist Pascal Le Boeuf and tenor saxophonist Adam Larson. It's telling that nearly the same band appears on Weinhold's sophomore effort, Cityscape, though it was recorded several years later. Oh, of course, has achieved worldwide acclaim for her work with Dave Douglas' quintet, and for leading her own remarkable band. Larson and brother Nils remain aboard on this piano-less date, while the excellent young bassist Raviv Markowitz has stepped in to replace Ms. Oh.

Not straight-ahead jazz by any means, Cityscape is an appealing set that bridges the gap between ECM-ish impressionistic jazz and modern fusion. Replete with interesting—albeit not too adventurous—tunes co-written by the Weinhold brothers, it's not merely a showcase for Bastian's obviously well-honed drum chops. No, this is a tight, well- integrated quartet with a signature group sound. Larson's a mobile, energetic soloist in the Chris Potter / Chris Cheek mold, with a fragile, somewhat reedy tone. He meshes extremely well with fleet-fingered guitarist Nils Weinhold, who eschews heavy effects usage and gets quite a bit of mileage out of his pure guitar tone. Brother Bastian locks in with Markowitz to form a crisp and dynamic rhythm team. When they get aggressive, as on the very funky "Mole Hunt" and "Everyday List" it's hard to sit still. Bastian is young and full of drum- fill juice: he's the sort of player who pushes hard but doesn't overwhelm. Tune-wise, the album shifts around quite a bit but remains resolutely tonal and somewhat conventional.

That said, the thematic content is quite appealing. Though the funky up-tempo stuff is what perked me up, mellower tunes such as the rustic "Home to Home" and the hookily intricate "One for the Doctor" are played with an equal amount of energy and verve. The only bald spot is the relatively mundane ballad "Alone," which seems to drag a bit in comparison to the other slower pieces.

Anyone into Pat Metheny, Kurt Rosenwinkel, John Abercrombie and the like will find lots to enjoy here. Though Larson is an equal lead voice, and brother Bastian is the leader, Cityscape seems very much Nils the guitarist's game.